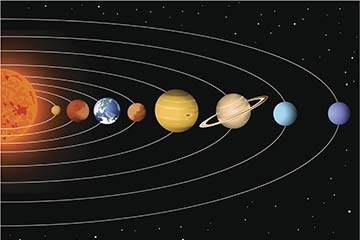 To figure out how many planets could support life, you first have to determine how you will define the concept of life.
suryazaidan/iStock/Thinkstock

For those not familiar with it, the Drake equation is used to predict how many technological civilizations might exist in the universe.

The only problem is that the Drake equation doesn't give us an answer; it just tells us what might be possible if we get the factors right. (Which we won't, because they're all hypothetical.) And while it would be fun to imagine that we could find a planet populated with people made of putty instead of carbon, it's probably unlikely. Instead, we have to define the parameters of life on Earth and see which other planets fit the bill.

The requirements themselves are pretty straightforward. For one, we need liquid water. Water dissolves and transports chemicals, causing important metabolic reactions. We also need energy to create and sustain life, so light energy (from a warm sun and atmosphere) or chemical energy (from chemical reactions) needs to be present. Nutrients are required to build and maintain life. A planet with a water cycle, habitable atmosphere or volcanic activity can replenish and circulate nutrients [source: Lunar Planetary Institute]. So it may seem like the chances are small that we'll find another planet that supports life in our universe. Those are pretty specific requirements, after all -- maybe there's one? Two?

Or maybe there are 60 billion planets in our galaxy alone that could potentially harbor life.

That's right -- we're not as special as we thought. It turns out that in the Milky Way, scientists now believe that there are 60 billion planets in the habitable zone. The habitable zone is located where a planet is warm enough to keep water on the surface in liquid form without it turning into gas [source: Gannon]. The planets must be near a star or have cloud cover that keeps moisture locked in. With hundreds of billions of stars in the Milky Way, there are a lot of habitable zones out there.

So that's the most recent answer we can give about our own galaxy. Which, lest we forget, is one of hundreds of billions of galaxies in the universe. Each galaxy is chock-full of stars, each of which could potentially neighbor a not-too-hot, not-too-cold planet. Best guess that researchers have? 50 sextillion [source: Anthony].

In other words, it's not entirely realistic for anyone to "predict" how many hospitable planets there are in the universe, since we're just starting to understand the planets in our own galaxy. But it's also not entirely unrealistic for me to hope that one of them is made of Play-Doh.

Author's Note: How many planets in our universe could support life?

While some find the possibility of extraterrestrial life firmly in the category of unicorns and psychic powers, one can't help but be a little awed by the idea that Earth has about 50 sextillion chances to make a new friend.

The Hitomi Satellite Briefly Glimpsed the Universe, Then Died — What Happened?
Where the Most UFO Sightings Are
A Brief History of Booze in Space