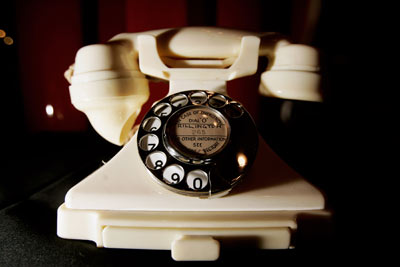 A Bakelite telephone in "100 Years of Plastic" at the Science Museum in London in 2007. The exhibition was a celebration of plastics timed to coincide with the 100th anniversary of Leo Baekeland's invention of Bakelite.
Bruno Vincent/Getty Images

Before the invention of plastic, the only substances that could be molded were clays (pottery) and glass. Hardened clay and glass were used for storage, but they were heavy and brittle. Some natural substances, like tree gums and rubber, were sticky and moldable. Rubber wasn't very useful for storage because it eventually lost its ability to bounce back into shape and became sticky when heated.

In 1839, Charles Goodyear accidentally discovered a process in which sulfur reacted with crude rubber when heated and then cooled. The rubber became resilient upon cooling -- it could stretch, but it snapped back to its original shape. It also retained its resilience when heated. We now know that the sulfur forms chemical bonds between adjacent rubber polymer strands. The bonds cross-link the polymer strands, allowing them to "snap back" when stretched. Charles Goodyear had discovered the process now known as vulcanization, which made rubber more durable.

In 1846, Charles Schonbein, a Swiss chemist, accidentally discovered another polymer when he spilled a nitric acid-sulfuric acid mixture on some cotton. A chemical reaction occurred in which the hydroxyl groups of the cellulose fibers in the cotton were converted to nitrate groups catalyzed by the sulfur. The resultant polymer, nitrocellulose, could burst into a smokeless flame and was used by the military in place of gunpowder. In 1870, chemist John Hyatt reacted nitrocellulose with camphor to make celluloid, a plastic polymer that was used in photographic film, billiard balls, dental plates and Ping-Pong balls.

In 1909, a chemist named Leo Baekeland synthesized Bakelite, the first truly synthetic polymer, from a mixture of phenol and formaldehyde. The condensation reaction between these monomers allows the formaldehyde to bind the phenol rings into rigid three-dimensional polymers. So, Bakelite can be molded when hot and solidified into a hard plastic that can be used for handles, phones, auto parts, furniture and even jewelry. Bakelite is hard, resistant to heat and electricity, and can't be easily melted or scorched once cooled. The invention of Bakelite led to a whole class of plastics with similar properties, known as phenolic resins.

In the 1930s, a Dupont chemist named Wallace Carruthers invented a plastic polymer made from the condensation of adipic acid and a certain type of diaminohexane monomers that could be drawn out into strong fibers, like silk. This plastic became known as nylon. Nylon is lightweight, strong and durable and became the basis of many types of clothing, coverings (tents), luggage, bags and ropes.

The use of these early polymers became widespread following World War II and continues today. They lead to the creation of many other plastics, like Dacron, Styrofoam, polystyrene, polyethylene and vinyl.

In the next two sections, we'll learn about the chemistry of plastic.

We'll learn about all of these points in more depth later on, but for now, here are a few useful tidbits about the structure of plastics.