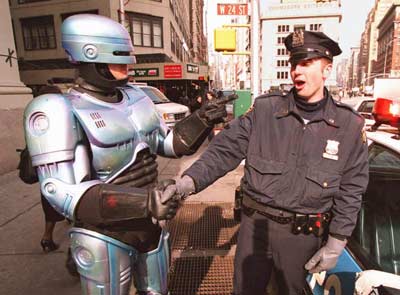 Although some current police robots can patrol the streets, they're not nearly as animated as the character from "RoboCop" seen here at the Toy Fair in New York City. See more robot images.
Timothy A. Clary/ AFP/ Getty Images

It's the summer of 2007 in Perm, Russia, and a new police officer has joined the force. The new cop gets a lot of attention. Not exactly svelte, the officer tips the scales at 550 pounds. This cop doesn't walk the beat either -- it rolls along the street on wheels. It's called R Bot 001, and it's the squad's first robot police officer.

R Bot 001 looks like a 5-foot-9-inch upright bullet or rocket moving around on four tires. Its main function is to monitor the streets for crime using its five video cameras. It has a button that citizens can press to contact the police station in times of need, and it even has the ability to deliver simple orders, like telling drunken pedestrians to go home and sober up.

The Perm police haven't released much more information about the robotic officer, possibly because R Bot 001's debut was less than stellar. A few hours after hitting the streets, the robot encountered some stormy weather. Unfortunately, the robot's casing wasn't waterproof. Water leaked into the robot, shorting out it's electrical system. Officers had to retrieve R Bot 001 and bring it back for repairs [source: The Australian].

But R Bot 001 isn't the first robot to find a place within a police unit. Many large police forces use robots for particularly dangerous situations, like disarming bombs or performing reconnaissance on a possible hostage situation. These devices may not look as impressive as RoboCop -- or even the R Bot 001 -- but they're sophisticated pieces of machinery designed to handle some of the most dangerous situations police can encounter. In this article, we'll learn what makes these robotic devices tick and the different ways police can use them.

In the next section, we'll look at the ways a police robot can be controlled.