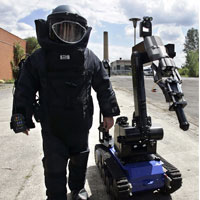 Police robots aren't autonomous. They can't think for themselves or make decisions -- a police officer controls every move remotely. Depending on the model, the robot may be wireless or may have a cable tethering it to a power or control station. Wireless models are radio controlled, like a complex remote control car.

An officer can control the robot from either a unique console specifically designed for the robot, or a laptop computer loaded with the appropriate software. Some models include specialized controllers, like custom joysticks that an officer can plug into a laptop, while others may require input through keyboard commands.

Robot command and control centers are portable, allowing officers to set up a station a safe distance away from where the robot will carry out its duties. Normally, an officer operates the robot within sight of it so that it's easier to maneuver it across difficult terrain or around obstacles.

This robot can be maneuvered in a rail station, on a rail car or bus, and even up stairs.
Luke Frazza/AFP/Getty Images

The operator can also see what the robot's cameras pick up on computer monitors. How far away the officer is depends upon the robot -- tethered robots are limited by the length of the cable connecting the machine to its power source or control center, while wireless robots can operate any distance within its capacity to detect radio signals.

In the next section, we'll look at an overview of a typical police robot.

Malfunctioning robots are the stuff of sci-fi horror stories, but they're also a reality. In 1993, a bomb-disposal robot in San Francisco behaved erratically just before it attempted to grip a dangerous pipe bomb. The robot stopped responding to commands sent by a police officer at the control center, and it began spinning in place. Fortunately, the robot hadn't already picked up the bomb, or the situation might have turned into a tragedy [source: The New York Times].