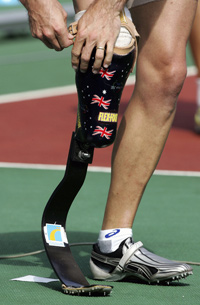 An amputee might have multiple prosthetic limbs, each specialized for different activities.
Ker Robertson/Getty Images

How do modern prosthetic limbs compare to those of historical times? One major difference is the presence of newer materials, such as advanced plastics and carbon-fiber composites. These materials can make a prosthetic limb lighter, stronger and more realistic. Electronic technologies make today's advanced prosthetics more controllable, even capable of automatically adapting their function during certain tasks, such as gripping or walking.

While new materials and technologies have certainly modernized prosthetics over the past century, the basic components of prosthetic limbs remain the same. Let's go over some of these.

The pylon is the internal frame or skeleton of the prosthetic limb.  The pylon must provide structural support and has traditionally been formed of metal rods. In more recent times, lighter carbon-fiber composites have been used to form the pylons. The pylons are sometimes enclosed by a cover, typically made from a foam-like material. The cover can be shaped and colored to match the recipient's skin tone to give the prosthetic limb a more lifelike appearance.

The socket is the portion of the prosthetic device that interfaces with the patient's limb stump or residual limb. Because the socket transmits forces from the prosthetic limb to the patient's body, it must be meticulously fitted to the residual limb to ensure that it doesn't cause irritation or damage to the skin or underlying tissues. A soft liner is typically situated within the interior of the socket, and a patient might also wear a layer of one or more prosthetic socks to achieve a more snug fit.

So now we know the components that make up a prosthetic device, but how are prosthetic limbs made, anyway?

An alternative to prosthetics?

Though it's still a relatively new and developing technique, experiments with limb transplantation have shown promising results. It's an extremely complicated surgery, yet several patients have successfully received transplanted hands at the Jewish Hospital, based in the Louisville Medical Center of the University of Louisville, Ky.