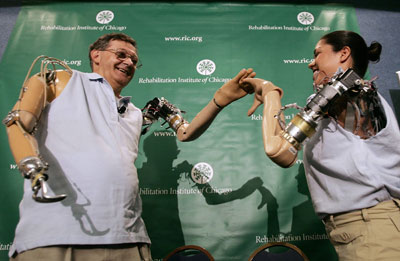 Jesse Sullivan (left) and Claudia Mitchell (right) high-five each other as they demonstrate the functionality of their thought-controlled bionic arms during a news conference in Washington, D.C.
Win McNamee/Getty Images

One of the most cutting-edge technologies used to control prosthetic limbs is called targeted muscle reinnervation (TMR) and was developed by Dr. Todd Kuiken at the Rehabilitation Institute of Chicago. To understand TMR, you need to know some basic physiology. Your brain controls the muscles in your limbs by sending electrical commands down the spinal cord and then through peripheral nerves to the muscles. Now imagine what would happen to this information pathway if you had a limb amputated. The peripheral nerves would still carry electrical motor command signals generated in the brain, but the signals would meet a dead end at the site of amputation and never reach the amputated muscles.

In the surgical procedure required for TMR, these amputated nerves are redirected to control a substitute healthy muscle elsewhere in the body. For example, the surgeon might attach the same nerves that once controlled a patient's arm to a portion of the patient's chest muscles. After this procedure, when the patient attempts to move his or her amputated arm, the control signals traveling through the original arm nerve will now cause a portion of chest muscles to contract instead. This is valuable, because the electrical activity of these chest muscles can be sensed with electrodes and used to provide control signals to a prosthetic limb. The end result is that just by thinking of moving the amputated arm, a patient causes the prosthetic arm to move instead.

As an example of neural interfacing technology, scientists can implant micro-scale electrodes in the brain to listen in on brain activity. When the patient mentally tries to move his or her amputated limb, the microelectrodes can intercept motor command signals generated in the brain, and these signals can then be used to control a prosthetic device. One exciting implementation of this technology comes from lab of Dr. Miguel Nicolelis lab at Duke University. Remarkable video footage documents the ability of monkeys implanted with microelectrodes to use their thoughts to control a prosthetic arm to feed themselves snacks.

Future advances in neural interfacing will allow artificial devices to more effectively stimulate the nerves or brain in order to restore a sense of touch and allow patients to feel their artificial limb. This capability will go a long way in closing the gap between prosthetic limbs and the natural limbs they're designed to replace.

These types of technological innovations are just some of the examples that show how the field of prosthetics is constantly advancing. While the challenges are great, remarkable progress has been made over the past few decades, and dedicated researchers around the globe are working each day to make prosthetic limbs as close as possible to the real thing.

Follow the links below for lots more information about prosthetic limbs and related topics.

The Defense Advanced Research Projects Agency (DARPA) funds tens of millions of dollars annually to advance cutting-edge prosthetic limb technology. Their goal is to develop prosthetic limbs that approach the function of the limbs being replaced. What makes the program unique is its willingness to fund exploratory research in order to make its goal a reality as soon as possible.