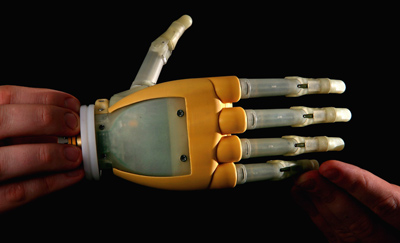 Different types of prosthetic limbs are designed with different goals in mind. Often these goals depend on the site of the amputation and the needs of the patient.

For example, a cosmetic prosthetic limb, called a cosmesis, is designed with appearance in mind rather than controllability. Advanced plastics and pigments uniquely matched to the patient's own skin tone allow a modern day cosmesis to take on an amazingly life-like appearance. Even details such as freckles, hair and fingerprints can be included, bringing the cosmesis to the point where it's nearly indistinguishable from the original missing arm or leg.

Other prosthetic limbs are designed with usability and function as a central purpose. As an example, a common controllable prosthetic hand might consist of a pincer-like split hook that can be opened or closed to grip objects or perform other types of tasks. This type of prosthetic device can be covered with a glove-like covering to make it appear more like a natural hand. Functional prosthetic limbs can actually be controlled in a variety of ways.

Body-powered prosthetic limbs are controlled by cables connecting them to elsewhere on the body. For example, a prosthetic arm can be controlled through a cable attached with a strap or harness to the opposite, healthy shoulder. The working shoulder is then moved in certain ways to control the prosthetic device -- similar to how you might use a hand lever on your bike to control the brakes.

Externally powered prosthetic limbs are powered with motors and can be controlled by the patient in several ways. The switch control method allows a patient to move his or her prosthetic device by toggling switches or buttons. The patient toggles the switches using the opposite shoulder, or he or she might be able to use remaining muscles in the residual limb to push the switches. Because a prosthetic hand or arm can perform a wide variety of motions, different sequences of switch toggling might be required to perform desired tasks.

A more advanced way to control a prosthetic limb is by listening to muscles remaining in the residual limb that the patient can still contract. Because muscles generate small electrical signals when they contract, electrodes placed on the surface of the skin can measure muscle movements. Although no buttons are physically pressed by the muscles in this case, their contractions are detected by the electrodes and then used to control the prosthetic limb -- in a way similar to the switch control method that was just described. Prosthetic limbs that function in this way are called myoelectric.

When a prosthetic arm has several joints, such as a transhumeral, or above-elbow, prosthesis, each joint might need to be controlled by the same switch or muscle. To accomplish this, sequential control methods allow one joint be positioned at a time. For example the patient might first use a switch or muscle contraction to signal for the prosthetic limb to bend the elbow joint, then signal for the prosthetic hand to close in order to grip an object.

Advanced lower extremity prostheses are equipped with a variety of mechanisms that help them to move naturally as a patient walks or runs. A prosthetic knee is particularly difficult to engineer, as it must constantly adjust to allow for normal walking, standing and sitting. Advanced artificial legs have a computer-controlled knee that automatically adapts to adjust to the patient's walking style.

Unfortunately, the price of prosthetic limbs tends to be very high. This is especially true of the prosthetic limbs containing electronic components. In fact, myoelectric prostheses and prostheses equipped with computer-controlled knees can cost many tens of thousands of dollars.

So, do you think these prosthetics are the most advanced on the market? Well, researchers and scientists have taken prosthetics to the next level. Read the next page to find out how.

Advanced prosthetic legs can be equipped with a microprocessor (computer chip) and sensors that measure angles and forces while a patient walks. Over time, the microprocessor learns how the patient walks and constantly adapts the stiffness of the knee accordingly.

Ossur's Rheo Knee is especially interesting because of how it adapts the knee's stiffness: Fluid inside the device contains metal particles, and when the device sends a magnetic field through the fluid, it thickens and stiffens the knee joint.