How does a rebreather work? 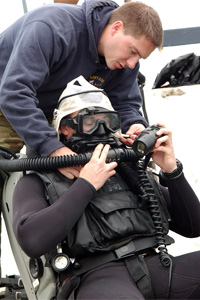 Lt. Evan Colbert gets helps with a MK-16 rebreather before a dive off Lima, Peru. Rebreathers have long been used by the military.
Image courtesy U.S. Navy/Andrew McKaskle

In conventional scuba gear, when you breathe in through the mouthpiece you get a fresh lungful of air from the tank that you carry on your back. When you breathe out, the exhaled air goes out through the regulator into the water in the form of bubbles. A rebreather is a scuba device that allows you to breathe your own air over and over again and produce no bubbles. To allow you to rebreathe your air, the device must do the following:

Rebreathers are considered to be advanced scuba gear, originally developed and typically used by the military, especially the U.S. Navy SEALs.

Advanced and commercial divers may use rebreathers, although intensive training is strongly recommended. In addition, the devices are expensive, costing up to $15,000.