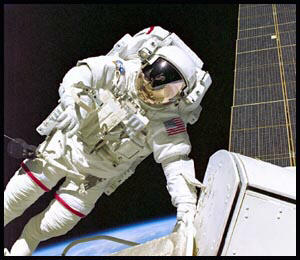 Think about how you suit up when you go outside on a ­cold winter's day. You have your shirt, pants, sweater, perhaps long underwear, jacket, gloves, hat or hood, scarf and boots. You put on quite a bit of clothing to protect you from the cold.

Now, imagine what you would have to put on to protect you from outer space. Space suits must provide all of the comfort and support that the Earth or a spacecraft does, addressing issues like atmosphere, water and protection from radiation.

Outer space is an extremely hostile place. If you were to step outside a spacecraft and you weren't wearing a space suit, the following things could happen:

So, to protect you from these dangers, a space suit must:

That's a big job. In this article, we will examine the problems of walking in outer space and how space suits are made to cope with them.