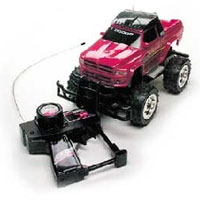 You have probably seen the ads on Saturday morning television proclaiming the amazing abilities of the "Super Ultra Road-rippin' Devastator" or some other radio controlled (RC) car. And you may have seen people at the park flying a model airplane or blimp, or controlling a miniature boat sailing serenely across a pond.

RC toys come in a large variety of models, including:

While the mechanics of how they operate can differ greatly between different toys, the basic principle is the same. All radio controlled toys have four main parts:

The transmitter sends a control signal to the receiver using radio waves (see How Radio Works for details), which then drives a motor, causing a specific action to occur. The motor in a car may cause the wheels to turn, while the motor in a plane may adjust the flaps. The power source is typically a rechargeable battery pack, but sometimes it's just normal batteries.

In many of the RC toys, the radio controlled motor provides guidance while another source of power provides the locomotion. Here are some examples:

Now let's take a closer look at each of the main components. ­ 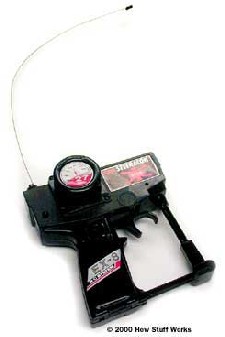 RC toys typically have a small handheld device that includes some type of controls and the radio transmitter. The transmitter sends a signal over a frequency to the receiver in the toy. The transmitter has a power source, usually a 9-volt battery, that provides the power for the controls and transmission of the signal. The key difference between radio controlled and remote controlled toys is that remote controlled toys have a wire connecting the controller and the toy, while radio control is always wireless.

Most RC toys operate at either 27 MHz or 49 MHz. This pair of frequencies has been allocated by the FCC for basic consumer items, such as garage door openers, walkie-talkies and RC toys. Advanced RC models, such as the more sophisticated RC airplanes, use 72-MHz or 75-MHz frequencies.

The majority of RC toys are labeled with the frequency range they operate in. For example, the RC truck below has a label designating it as a 27-MHz model.

This truck operates at 27 MHz.

Most RC toy manufacturers make versions of each model for both frequency ranges (27 MHz and 49 MHz). That way, you can operate two of the same model simultaneously, for racing or playing together, without having to deal with interference between the two transmitters. Some manufacturers also provide more specific information about the exact portion of the frequency band that the toy operates in. A good example is Nikko of America, who offers the option to create racing sets of up to six toys with each model tuned to a different part of the 27-MHz frequency range.

Most full-function controllers have six controls:

In most full-function controllers, not pressing any buttons or turning any knobs causes the toy to stop and await further commands. Controllers for more advanced RC systems often use dual joysticks with several levels of response for precise control.

Let's take a closer look at the RC truck we saw on the last page. We will assume that the exact frequency used is 27.9 MHz. Here's the sequence of events that take place when you use the RC transmitter:

If you look inside the RC truck, you will see that it is very simple.

Inside an RC Truck 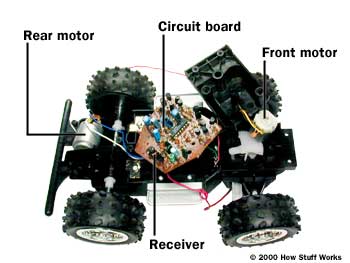 A look at the inside of the truck

Inside our RC truck, we have two electric motors, an antenna, a battery pack and a circuit board.

One motor turns the front wheel right or left, while the other motor turns the rear wheels to go forward or backward. The circuit board contains the IC chip, amplifier and radio receiver. A few simple gears connect the motors to the wheels. It is really amazing how versatile the range of movement is with so few components.

For more information on RC toys, radio control and related topics, check out the links on the next page.