Where is Reverse Osmosis Used? 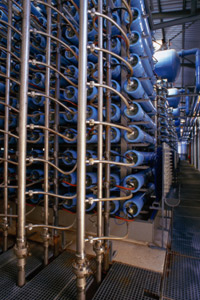 These nifty blue guys are reverse osmosis cells, the semipermeable membranes that take the salt out of water in desalination plants.
Andy Sotiriou/Photodisc/Getty Images

Unlike osmosis, we can't simply watch reverse osmosis happen in many everyday circumstances. It was only in the 1950s when researchers began exploring how to desalinate ocean water that reverse osmosis was brought up as a possibility. They found that applying pressure to the saltwater side could work to produce more fresh water, but the amount they created was extremely small and not useful on any practical scale. What changed?

A much more advanced filter, created by two UCLA scientists. The hand-cast membranes made from cellular acetate (a polymer used in photograph film) allowed larger quantities of water to move through much faster, and the first reverse osmosis desalination plant began running a small scale operation in Coalinga, California in 1965 [source: The Economist].

Which leads us to one of the most common uses of reverse osmosis we've already discussed: desalination of water. That includes large plants (there are over 100 countries using desalination) or smaller operations--for instance, the kind of filter you might take camping to ensure a healthy drinking supply [source: FDU].

Reverse osmosis is also one of the few ways that we can take certain minerals or chemicals out of a water supply. Some water sources have extremely high levels of natural fluoridation, which can lead to enamel fluorosis (mottled teeth), or the much more severe skeletal fluorosis (an actual bending of a person's bones or skeletal frame). Reverse osmosis can filter out fluoride, or other impurities, on a large scale in a way that a charcoal based filter (like the one most commonly found in homes) can't.

It's also used for recycling purposes; the chemicals used to treat metals for recycling creates harmful wastewater, and reverse osmosis can pull clean water out for better chemical disposal. But even more fun than recycling? Wastewater reverse-osmosis treatments, wherein wastewater goes through the process to create something drinkable. They've nicknamed it "toilet to tap" for a reason, and although it might give you pause, it's a promising ways for developing nations to produce drinkable water.

One more fun thing about reverse osmosis is that the high pressure that makes reverse osmosis effective can actually recycle itself. High pressure pumps force water through, and the remaining salty water is shot out at an extremely high rate. If this off-shoot is put through a turbine or motor, the pressure can be reused to the pumps that initially force the water through, thus re-harvesting energy.

All this industrial jazz is great, but how does reverse osmosis technology affect you, the consumer, on a smaller scale? Find out on the next page.