Could Our Spacecraft Accidentally Ignite an Alien World's Entire Atmosphere?

Browse the article Could Our Spacecraft Accidentally Ignite an Alien World's Entire Atmosphere? 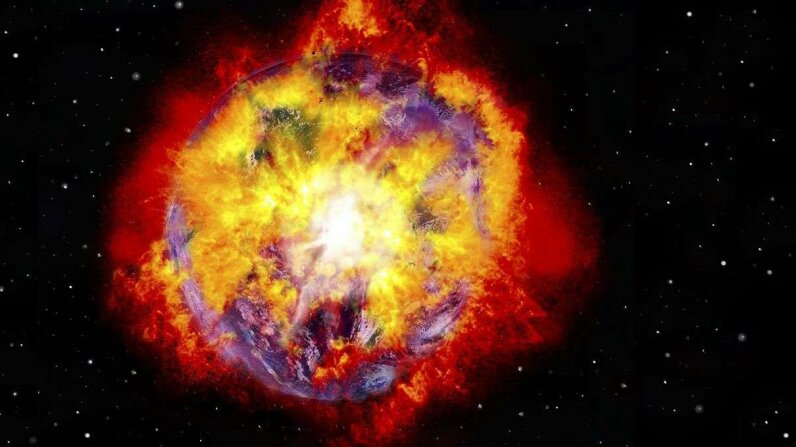 Other worlds have significant amounts of gas like hydrogen or methane in their atmospheres. Could a rocket's engine or stray spark accidentally light a whole world on fire? Steven Puetzer/Getty Images

Some day in the distant future, explorers from Earth decide to visit Jupiter, the largest planet in our solar system, and probe its mysteries. At the end of their nearly two-year journey, they reach the giant planet, so immense that more than 1,300 Earths would fit inside it.  As the spacecraft descends, the astronauts marvel at Jupiter's 67 moons — so many that astronomers haven't even named them all. They gaze in wonder at the planet's Great Red Spot, an immense, perpetual hurricane-like storm, and ponder the planet's shroud of brown, yellow, red and white clouds.

But when our fictional adventurers deploy the spacecraft's rocket thrusters to slow their descent, something awful happens. The heat and flames from the nozzles come into contact with the Jovian atmosphere, which is 90 percent hydrogen, and ignite it. Quickly, the Jupiter's sky turns into a fiery inferno. The astronauts realize that they've got to get out of there quick — they just accidentally ignited an entire planet's atmosphere.

It's not hard to imagine how Hollywood's amazing computer-generated special effects that would make that fictional disaster seem vivid. And it might make a great premise for a science-fiction thriller; in fact, the idea made its way into an episode of the show "Star Trek: Enterprise." But fortunately, it's not something that will ever happen in real life.

Jupiter, Saturn and Neptune, the three immense gas giants in the outer solar system, all have atmospheres made up of mostly hydrogen. That's a chemical that when it's in gas form on Earth, can be explosively combustible. It's also the chemical that the sun uses for fuel. And Titan, Saturn's largest moon, has clouds of methane floating in its atmosphere. Back in 1995, according to Universe Today writer Fraser Cain, some non-scientists even worried that NASA's Galileo spacecraft, which contained a plutonium reactor, might trigger a massive explosion that would turn Jupiter into a second star in our solar system.

If you need an example of hydrogen's flammability, consider the 1937 destruction of the Hindenburg airship, which suddenly turned into an inferno as it attempted to dock, killing 37 people. Though the exact circumstances of the disaster remain murky, scientists who investigated the evidence in 2013 came up with the theory that a leaky valve or broken wire caused hydrogen to leak into the ship's ventilation shafts, where it was ignited by static electricity from a storm that the airship had flown through.

A hydrogen explosion like that of the Hindenburg could occur on Earth, but not on one of the outer planets.

"The kind of ignition you're talking about is rapid oxidation," explained Drake Deming, an astronomy professor at the University of Maryland who has studied planetary atmospheres as a scientist for NASA's Goddard Space Flight Center. "And there isn't enough free oxygen in the atmospheres of the outer planets to allow that to happen."

"Oxygen is the key," agrees Marc Rayman, chief engineer and mission director of NASA's Dawn mission, via email. "Combustion occurs when fuel combines with oxygen in a chemical reaction that releases heat." Jupiter and Saturn have plenty of chemical fuel, as does Saturn's moon Titan, which has methane in its atmosphere. But without oxygen, they won't burn. Conversely, he explains, Earth's skies are similarly unlikely to burn, because while there's plenty of oxygen, the nitrogen that makes up most of Earth's atmosphere isn't a very good fuel.

If it were possible to ignite the atmosphere of Jupiter, it most likely would have happened by now, since the planet has been hit many times by objects much bigger and more energetic than a spaceship. As astronomer Phil Plait notes, that planet gets hit with something that's big enough to see from Earth about once each year. The most famous example is the 1994 collision between Jupiter and the comet Shoemaker-Levy 9, which was broken by the planet's intense gravity into a dozen separate hot pieces that exploded with a huge release of energy.

But those explosions didn't cause Jupiter's atmosphere to ignite.

"If an object collides with Jupiter or Saturn (e.g., the collisions of comet SL-9 with Jupiter in 1994) it will create high-temperature chemical reactions and localized pressure and heating," Deming says via email. "But the overpressure from such an event would propagate as a shock wave, expanding and cooling. So if the atmosphere is stable before the collision, it isn't likely to become unstable afterwards."

What would it take to cause Jupiter's atmosphere to explode?

"Igniting an atmosphere would require providing it with an extraordinary amount of whichever ingredient it lacks, either fuel or oxygen," says NASA's Rayman. "Given how large planets are, the addition of a supply from something as small as a typical or even large comet or asteroid would be such a tiny fraction of the total atmosphere that it would be quite insufficient, like trying to fan a huge bonfire with a single, gentle puff. There might be some localized combustion, but it would quickly burn out, just as the fire from the hydrogen in the Hindenburg zeppelin did."

According to Cain, basically it would require half as much oxygen as there is hydrogen in Jupiter's atmosphere. It's not likely that anybody is going to be able to transport that much oxygen there to start the fire.

Could something like this happen somewhere we haven't discovered yet? The universe is full of possibilities, but it looks as though — at least for now — sci-fi screenwriters will have to come up with a more plausible storyline.

Now That's Interesting
During the Manhattan Project's development of the atomic bomb in the 1940s, some of the scientists discussed the possibility of accidentally igniting the Earth's atmosphere with a massive chain reaction caused by the nuclear bomb blast. They decided it wasn't likely to happen — and thankfully, it didn't.