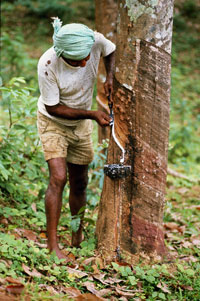 ­The Mesoamerican peoples, such as the Mayans and the Aztecs, first tapped rubber from one of several trees found in Central and South America:

Explorers and colonists brought samples of these trees when they headed back to Europe. Eventually, seeds from these trees were transported to rubber plantations in other tropical climates during the era of European colonialism.

Currently, most natural rubber comes from Latin American-derived trees transplanted to Southeast Asia (Thailand, Indonesia, Malaysia), as w­ell as India, Sri Lanka and Africa. In these areas, you can find other rubber-producing trees including:

Of all of these trees, the best rubber-producing tree is H. braziliensis.

It takes about six years for a rubber tree to grow to a point where it's economical to harvest the sap, which is called latex. Here's how you tap one: The collector makes a thin, diagonal cut to remove a sliver of bark. The milky-white latex fluid runs out of the bark, much as blood would run out of a small superficial wound on your skin. The fluid runs down the cut and is collected in a bucket. After about six hours, the fluid stops flowing. In that six-hour period, a tree can usually fill a gallon bucket. The tree can be tapped again with another fresh cut, usually the next day.

The Mesoamericans would dry the collected rubber latex and make balls and other things, like shoes. They would dip their feet in the latex and allow it to dry. After several dips and dryings, they could peel a shoe from their feet. Next, they smoked their new rubber shoes to harden them. The Mesoamericans also waterproofed fabrics by coating them with latex and allowing it to dry. This process was used to make rubber items until around the 1800s.

Columbus brought back rubber balls with him upon returning from his second voyage to the New World, and in the early 1700s, rubber samples and trees were brought back to Europe. At that time, rubber was still a novelty. Rubber made in the Mesoamerican way resembled a pencil eraser. It was soft and pliable. In 1770, the chemist Joseph Priestley was the first to use rubber to erase lead marks. He coined the word "rubber" because he could remove the lead marks by rubbing the material on them.

Keep reading to learn what makes rubber so intrinsically stretchy.