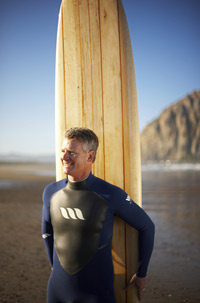 Many wet suits are made of a synthetic rubber that goes by the name of neoprene.
Chris Leschinsky/Getty Images

The rubber industry really started booming with the invention of the automobile. All those tires created and still create a huge market for vulcanized rubber. In the early 20th century, most tires were made from vulcanized lat­ex rubber, which was derived from trees. The United States was a leading producer of automobiles and a big consumer of world rubber, which was controlled by British plantations throughout Asia.­

It was only a matter of time before scientists asked if rubber could be made artificially. As early as 1860, they had already worked out the chemistry of rubber and its vulcanization process. Chemists had heated rubber to break it apart and found that it produced isoprene, oil and tar. They could make isoprene from oil and then combine isoprene artificially to make rubber. It seemed the stuff of pencil erasers and automotive tires could be made from petroleum products.

You've probably heard of a few of these synthetic rubbers. For example, neoprene is a soft, foamy, insulating rubber that's often used in wet suits. Scuba divers and surfers have DuPont chemist Wallace Carothers, who turned a polymer of chloroprene into polychloroprene in 1930, to thank for keeping them warm during their ocean adventures. Incidentally, Carothers later invented another popular polymer called nylon.

­Here's a­nother synthetic rubber we bet you've heard of: silicone. In 1945, chemists at Dow Corning developed a synthetic rubber that relied on silicone-based polymers instead of carbon-based ones. They created a light, flexible and chemically inert material that's often used in the medical device industry and that may even sit in the body in the form of breast implants.

Latex is the last synthetic rubber we'll talk about. You probably remember that latex refers to the rubber tree sap. It's also the name of a thinner, stronger synthetic rubber that retains the natural milky color of that sap, at least initially. In 1921, chemist Peter Schidrowitz discovered that you could vulcanize latex by adding polysulfides to it and heating it at lower temperatures than traditional vulcanization over a long time. Furthermore, because this type of vulcanization occurred at lower temperatures, you could add dyes to the latex to produce colors. This is the type of latex that you find in latex gloves, dental dams and condoms.

Learn how much money there is to be made in latex gloves and the like, next.

Since the advent of HIV and other bloodborne pathogens, the use of latex gloves by health care workers has increased. However, approximately 17 percent of U.S. health care workers suffer from latex allergies [source: Lehrman]. People can be sensitive to the latex itself, cornstarch or other chemicals added to the latex rubber. Alternatives to latex gloves include vinyl gloves (a type of plastic).