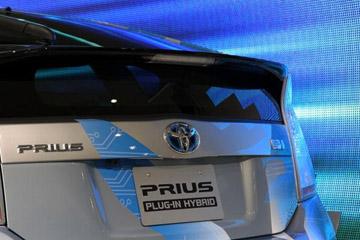 Hybrid cars do burn gasoline, but not as much as conventional ones.
Koichi Kamoshida/Getty Images

Since hybrid cars burn regular gasoline, they emit the same greenhouse gases as conventional cars. But since hybrid cars are much more fuel efficient than conventional vehicles -- the U.S. Energy Information Administration sets the average mileage for a hybrid at 38.7 miles per gallon (16.5 kilometers/liter) compared with 26.7 (11.4 kilometers/liter) for a gas-only vehicle -- they require far less gas to cover the same distance.

If every gallon of gasoline contains 20 pounds (9 kilograms) of carbon dioxide, then a hybrid car will emit 51.6 pounds (23.1 kilograms) of carbon dioxide every 100 miles (161 kilometers), while a conventional car will emit 74.9 pounds (34 kilograms). If you multiply those numbers over the lifetime of a vehicle, hybrids more than make up for their heavier production footprint. Let's look at some more lifetime emissions numbers.

The Argonne National Laboratory ran a side-by-side comparison of hybrid and conventional vehicles over their entire life cycle, which includes vehicle production, vehicle operation and the energy required to produce fuel for both cars. If you assume that both vehicles travel 160,000 miles (257,495 kilometers) over their lifetime, the conventional vehicle requires 6,500 Btu of energy per mile compared to 4,200 Btu per mile for a hybrid. That higher energy input results in far greater lifetime greenhouse gas emissions for conventional vehicles compared to hybrids, more than 1.1 pounds (500 grams) per mile compared to 0.75 pounds (340 grams) per mile [source: Burnham et al].

But there is an interesting side note to the hybrid vs. conventional debate. Hybrid carmakers like Toyota are set to release a new breed of plug-in hybrids. Equipped with a bigger battery pack, these hybrids can be plugged into the wall like an electric car, giving an extra 10 to 20 miles (16 to 32 kilometers) of zero emissions driving before the gas engine kicks in. Toyota expects to sell 20,000 to 30,000 units of its 2011 Plug-in Prius -- and more in the coming years [source: Green].

The trouble with plug-in hybrids (and electric cars, too) is that electricity isn't always cleaner than gasoline. More than 45 percent of electricity in the U.S. is generated by coal-powered plants [source: EIA]. According to another Argonne National Laboratory report, if a plug-in hybrid charges from coal-generated electricity, it could be responsible for emitting up to 10 percent more greenhouse gasses than a conventional vehicle and up to 60 percent more than a standard hybrid [source: Elgowainy].

For lots more information about hybrids, electric cars and the world of alternative-fuel vehicles, see the links below.