More Coriolis: What it is and isn't 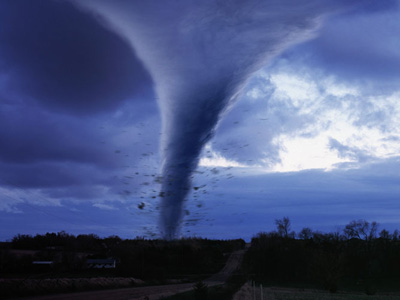 This thing? No match for the Coriolis effect.
Don Farrall/Getty Images

While some explanations of the Coriolis effect rely on complicated equations and confusing scientific jargon, there's a simpler way to visualize it: Picture yourself at the center of a merry-go-round (symbolizing the North Pole) spinning counterclockwise. If you throw a ball straight across to a person on the opposite side (the equator), the ball will appear to veer to the right because that person's moving faster than you are.

Now that you have a better understanding of what the Coriolis effect is, you should also know what it isn't. Most importantly, it isn't some all-powerful force that affects every moving object on the planet. Real forces, like gravity, can compete with -- or even overwhelm -- the Coriolis effect. This competition is more likely to occur with smaller objects that aren't traveling very fast or very far.

Let's reconsider the merry-go-round example. Unlike the Earth, that merry-go-round makes complete rotations several times a minute. Our planet, on the other hand, merely spins around once every 24 hours -- not enough to affect a game of catch or a flushing toilet. Even tornadoes are too small to be affected by the Coriolis "force." Find out exactly why on the next page.