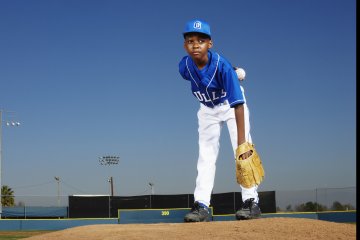 When he throws the ball, will the rotation of the Earth change where it goes?
Fuse/ThinkStock

If you have a lot of patience, you can see proof of the Coriolis effect on an object's movement using a device known as Foucault's pendulum. These pendulums can be found in several places around the world and are considered the best of their kind. Named after French scientist Léon Foucault, these massive experimental devices were designed to show how the Earth revolves on its axis. You can find them in universities and planetariums throughout the globe.

A Foucault's pendulum is anchored by a ball bearing, has an extra-large pendulum mass and a superlong string so it can swing slowly and withstand the effects of air resistance. Since the pendulum doesn't have outside forces influencing its movement, the only thing acting on it is the rotation of the Earth beneath it. As it swings, the Coriolis effect makes the pendulum veer off to the side and slowly change its swinging plane. After about 24 hours of painful waiting, you'll see that it has made one full rotation.

If you don't have that much time to kill, you can still observe the Coriolis effect in action. Although the Coriolis effect has a negligible impact on baseballs, it can affect the trajectory of very fast long-range projectiles like missiles and speeding bullets. During World War I, the Germans had to compensate for the Earth's movement as they fired shells at Paris with an extremely heavy howitzer that they called Big Bertha. If they hadn't taken the Coriolis effect into account, their shells, which were fired from 70 miles (112.6 km) away, would have gone astray by nearly a mile (1.6 km) [source: Veh].

So, while the Coriolis force might be called imaginary by some, its effects can be quite real. Just do everyone a favor and try not to leave your toilet unflushed for three weeks to prove that point.