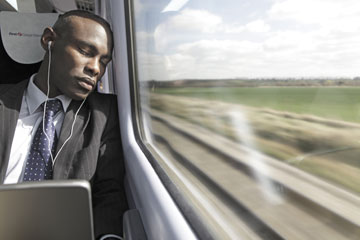 Relativity is like a triple-scoop ice cream cone; most of us just can't gobble it down in one bite, not without experiencing some serious brain freeze. So let's tackle the topic one scoop at a time. We'll start with the version of relativity that dates back more than four centuries: Galilean relativity.

Yes, this scoop of cosmic gelato originates with famed Italian astronomer Galileo Galilei, and it breaks down like this: Any two observers moving at constant speed and direction will obtain the same results for all mechanical experiments.

Let's say the experiment in question is nothing more complicated than throwing a Ping-Pong ball down the aisle of a train. As long as the speed and direction are constant, the Ping-Pong ball would behave exactly the same whether the train's creeping along at a snail's pace or barreling down the tracks. As long as the train isn't jerking around due to speed or directional changes, there's absolutely no difference inside the train car.

Outside the speeding train, however, it's a different story (or frame of reference).

To the individual aboard the speeding train -- let's say it's traveling at 100 miles per hour (161 kilometers per hour) -- the ball appears to move at regular speed. To the individual standing by the tracks, the ball (assuming he or she could see it) would appear to move with the speed of the train, plus the speed with which it was thrown.

Now here's where it gets tricky: What if you were to shine a flashlight up the aisle of the train? Would the light waves travel 100 miles per hour faster than the speed of light? Not so, according to physicists Albert A. Michelson and Edward Morley. In 1879, the two Americans conducted a groundbreaking experiment to measure the speed of light. As it turns out, light travels at a constant speed of 186,000 miles per second (300,000 kilometers per second). It can't travel any faster by any means, breaking the concept of Galilean relativity.

Luckily, Albert Einstein stepped in to fix things in 1920 with his theory of special relativity.