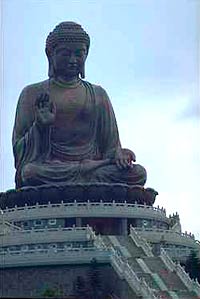 The Buddha couldn't fully relate his new understanding of the universe, but he could spread the essential message of his enlightenment and guide people toward achieving the same understanding. He traveled from place to place teaching the four noble truths:

The Noble Eightfold Path is a list of eight ideals that guide a person toward greater understanding of the universe. The eight ideals are:

On the surface, the eight ideals are incredibly vague -- they're open to almost any interpretation. Buddhist sects do view them differently, but generally speaking, Buddhists follow the path by approaching the world with compassion, patience and joy, and contemplating the universe through meditation. The fundamental goals are to cultivate morality (shila), meditation (dhyana) and wisdom (prajna).

Buddhist monks spend a lot of time in solemn meditation, but most are also jovial and light-hearted much of the time.

While nirvana is possible for any person, in most Buddhist sects only monks attempt to achieve it. Lay Buddhists -- Buddhists outside the monastic community -- strive instead for a higher existence in their next life. They follow the Noble Eightfold Path and help others, trying to accumulate good Karma. In this sense, they're working toward nirvana because they're setting up a future life in which they might achieve nirvana.