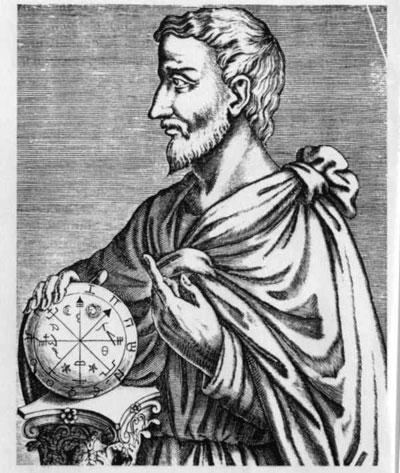 In the world of Harry Potter, Hermione Granger's favorite subject is arithmancy. The novels don't offer much detail, but they make it clear that arithmancy involves the magical properties of numbers. Hermione learns to use complex charts to perform numerical divination, or tell the future using numbers.

In the real world, arithmancy is known as numerology. According to numerologists, everything in the world is dependent upon the mystical properties of numbers. These properties come from the numbers' inherent vibration. Other new-age practitioners use the term vibration to describe beliefs in the power of items like crystals, gemstones, colors and essential oils.

As the theory goes, each number has a unique vibration, giving it certain properties. These properties can shed light onto a person's behavior or predict whether romantic partners are compatible. Numerological analysis can determine a person's lucky number or lucky day. Recurring numbers can offer clues into how the world works or the significance of people and events. According to many numerologists, nothing happens by accident -- everything happens because of numbers.

Most numerologists credit Pythagoras with founding the field of numerology. Pythagoras was a philosopher who was born in Greece around 569 B.C. Historians don't know much about Pythagoras, since little of his original work survives and most of the people who wrote about him did so hundreds of years after his death. In fact, some historians believe that the discoveries usually attributed to Pythagoras really came from several of his followers. In addition, some historians argue that the personality traits ascribed to him -- like that he would not allow his followers to eat or even touch beans -- are apocryphal.

The sum of sequential odd integers, beginning with one, is a square number.

Pythagoras and his followers, known as Pythagoreans, studied mathematics, music and philosophy. Many textbooks credit the Pythagorean school with several important discoveries, including:

In addition, Pythagoras and his followers believed in mystical properties of numbers. According to Underwood Dudley, author of "Numerology: Or What Pythagoras Wrought", the Pythagoreans became interested in number mysticism after discovering a particularly fascinating fact about numbers. If you add up a series of odd numbers beginning with the number one, the result is always a square number.

Discoveries like this led the Pythagoreans to the conclusion that "all is number." According to one interpretation, this means that people can measure everything in the world and describe it in terms of numbers and proportions. This is a reasonable idea, and it has had a big influence on science and mathematics. But according to another interpretation, "all is number" means that everything in the world is made of numbers and can be reduced to a numerical value.

The Properties of Numbers

In their study of mathematical concepts, the Pythagoreans sorted numbers into categories. Numbers like 1, 4 and 9 were square because a corresponding number of dots or pebbles could be arranged in a perfect square. One, three, six and 10 were triangular -- one, three, six or 10 dots can be arranged into regular triangles. Two, six and 12 were oblong, since the corresponding number of pebbles formed rectangles.

Along with describing numbers in terms of math and geometry, the Pythagoreans also described them in terms of non-numerical traits. These traits had more to do with intuition and mysticism than science or mathematics. For example, odd numbers were masculine, and even numbers were feminine. The number one was creative, since the addition of multiple ones can create any other number. Two represented duality and was female, while three was male. As the sum of two and three, five represented marriage, and since it fell exactly in the middle of the numbers one through nine, it also represented justice.

Ten was a sacred number, largely because it is the sum of the first four digits. The holiness of the number 10 led to a list of 10 fundamental opposites:

After the death of Pythagoras, interest in mathematical mysticism ebbed. It reappeared with the Neo-Pythagoreans around the first century A.D. Pythagoras' non-mathematical theories eventually faded. In the late 1800s, Mrs. L. Dow Balliett published several books on number vibration, music and colors. Other writers may have published work prior to Balliett, but her books seem to incorporate Pythagorean principles and add the concepts used in numerology today.

According to Balliett and modern numerologists, each number has a specific vibration. People, foods, objects and colors also vibrate. In order to live a productive and harmonious life, people should make sure their environment vibrates in harmony with their own vibrations. This concept appears frequently in other new-age practices, some of which describe it as an affect of the movement of subatomic particles. However, there has been little scientific study to identify or quantify such a vibration or to analyze its affect on human existence.

Some numerologists have also associated this vibration with the music of the spheres, or the sound Pythagoras believed the planets and the Sun made while orbiting the Earth. Pythagoras believed that the planets were embedded within transparent, physical spheres and that the distance between them corresponded to musical ratios. Science has since disproved both of those ideas, as well as the idea that the sun orbits the Earth.

Unlike the Pythagoreans, modern numerologists apply numbers to people in addition to applying intangible concepts to numbers. According to most numerologists, the numbers one to nine have unique properties that are the direct result of their inherent vibration. Some of these properties come from Pythagorean writings, and others come from the way cultures around the world use and approach numbers.

Different numerologists apply different attributes to numbers, but here's a run-down of some of the most popular.

Some systems also designate numbers with repeating digits as master numbers, which include all the attributes of two other numbers:

Numerology purports to tell the future, guide human behavior, predict the outcome of relationships and otherwise divine the unknowable by figuring out a person's numbers. For example, if the number nine has a particular vibration, a person whose number is nine has the same vibration. That person can choose what to eat, where to go and how to live based on which choices have a vibration that is compatible with nine. We'll look at how numerologists determine a person's number next.

Numerology applies non-numeric concepts to numbers. Similarly, synesthesia is a neurological condition in which a person associates one sense with perceptions from an unrelated sense. For example, a person with synesthesia might associate colors with words or smells with musical notes. 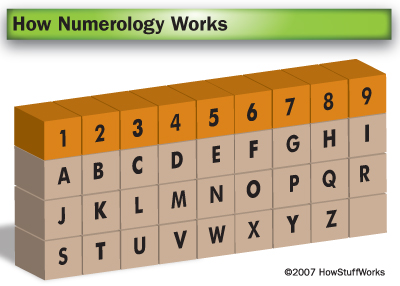 The process of translating words to numbers is central to numerology. The practice has roots in Greek, Latin and Hebrew gematria, or the practice of turning words into numbers for the purpose of divination. People have used gematria to study and interpret the Torah, the Bible and other religious texts.

Most of the time, numerologists focus on people's names, using a simple chart to change names into numbers. Different numerology systems use different charts, but an easy one begins with "a" equaling 1, "b" equaling 2 and so forth.

Numerologists typically use the name a person received at birth. Some argue that unborn babies select their names themselves and communicate them to their parents psychically, making sure their name will suit them and yield the correct number. According to numerologists, the name a person receives at birth is more significant than nicknames, names taken upon marriage, or otherwise changed names.

To determine a person's number, the numerologist picks the corresponding numbers from the chart and adds them together. If the result has two or more digits, the numerologist will add those digits together, repeating that step until arriving at a single digit. For example:

Many numerology systems also use a person's date of birth to arrive at another number known as the birth, life or destiny number. Harry's birthday, July 31, 1980, becomes:

Some numerologists use charts or diagrams to examine the numbers and letters in relations to one another. These diagrams can resemble astrological charts and can add additional layers of meaning to the numerological reading. But regardless of whether a numerologist uses a simple or complex system to determine the results, the final analysis will often sound much like a horoscope.

Numerologists will interpret the results and the connotations of each number to make recommendations or theorize about a person's future. Recommendations often include:

Like astrology, numerology is a type of applied mysticism - it correlates a mystical symbol with a person's life. For this reason, some people have credited numerology with helping them to make personal or financial decisions. However, there's no proof that the system works or that there is any real correlation between the numbers and their associated concepts.

The Number of the Beast

The technique used to determine a person's number has also been used to associate people's names with the number of the beast, or 666, which appeared in the book of Revelation. Many people associate this number with the end of the world or the devil, although with enough tweaking it's possible to make virtually anyone's name total 666.

Some people notice the repeated appearance of a particular number in their daily lives, in historical records or in religious texts like the Bible. It often seems that the repetition is too frequent to be coincidental. In some cases, people have theorized that these repeating numbers have special significance or demonstrate the influence of a deity or supernatural force. Although not strictly part of numerology, this perception often assigns numerology-like attributes to the frequently appearing numbers. This has led to the 23 Enigma and other beliefs that specific numbers are at the center of a pattern or conspiracy.

Critics, on the other hand, dismiss such occurrences as coincidence for a number of reasons:

These criticisms can also apply to the practice of numerology. For example, some practitioners say they see their numbers everywhere, and that this confirms that numerology is real. However, according to critics, the frequent appearance is coincidental. In addition, critics point out that people are likely to remember seeing their numbers and forget seeing other numbers. In other words, a person whose number is seven will remember seeing lots of sevens while disregarding all the sixes, eights and other numbers he encounters. People are also more likely to remember the numerical attributes that apply to them while disregarding the ones that don't. This phenomenon is known as confirmation bias.

But the biggest criticism of numerology is that it's based on an invented system of counting. This system developed to allow people to count objects in groups of ten, most likely because most people have ten fingers on which to count. Even the English words for numbers, which come from Old English, reflect these groupings of ten. "Eleven" means "one left," and "twelve" is an abbreviation of "two left."

However, this system, known as a base-10 system, isn't the only -- or even necessarily the oldest -- system of counting. Indigenous tribes in Australian, New Guinea, Africa and South America developed number systems that counted in pairs. Rather than one, two, three, four, five, six, these progressed more along the lines of one, two, two plus one, two twos, two twos plus one, three twos. Some societies also used base-12 and base-60, which we still use to tell time.

In other words, numerology, like astrology, is based on an invented system that people developed to better organize the objects around them. While people often find such systems helpful on a spiritual or emotional level, there's no scientific evidence to prove that the system really works the way practitioners say it does.

People often express excitement when they learn that a friend or acquaintance shares their birthday. However, shared birthdays are common -- in a group of only 23 people, there is a 50 percent probability that two will have the same birthday. To learn more about the birthday paradox, check out The Birthday Problem from Wolfram Math World or our question of the day on the subject.