The Grim Reaper in Popular Culture 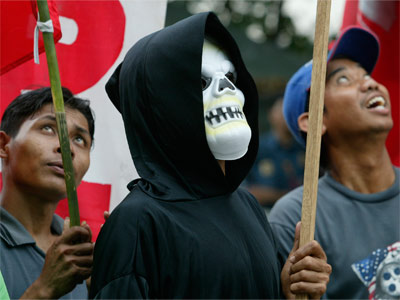 Protesters often don a Grim Reaper costume to make a point. This one is demonstrating against the presence of the International Monetary Fund and the World Bank during a rally in the Philippines in October 2004.
AP Photo/Bullit Marquez

­No doubt, the Grim Reaper makes a great character, which is why he has appeared in stories and legends for centuries. One archetypal story -- the "cheating death" story -- tells of a person trying to trick the Reaper in an effort to escape death. Henry Wadsworth Longfellow's "The Legend of Rabbi Ben Levi" is a classic example. In Longfellow's poem, death comes for the holy man with a grim announcement: "Lo! the time draws near/When thou must die." The rabbi asks if he can hold death's sword. Death hands the weapon to the rabbi, who quickly runs and hides until God can intervene on his behalf. God appears and spares Ben Levi's life, but tells the rabbi to return the sword to its rightful owner.

Other seminal works have solidified our modern view of the Reaper, such as the Danse Macabre, or Dance of Death, a type of play that emerged in the wake of the Black Death. The purpose of these plays was to prepare churchgoers for the inevitability of death. The play usually took place in a cemetery or churchyard and dramatized a victim's meeting with death, personified as a skeleton. The victim provides several arguments why his life should be spared, but these are found insufficient and death, accompanied by an entourage of other skeletal figures, finally leads him away. The scenes of this play became popular subjects for several German engravers, including Bernt Notke and Hans Holbein. The prints of these artists showed skeletons dancing among persons from all walks of life -- a lesson that no one, not even royalty, could escape death.

In the modern era, "The Seventh Seal" by Ingmar Bergman has been just as influential. The 1957 film tells of Antonius Block (played by Max von Sydow), a knight who returns from the Crusades to find that the plague has killed many of his countrymen. Death (played by Bengt Ekerot) waits for Block, as well. Stalling, the knight challenges Death to a chess match, which Block eventually loses. Although the story is haunting, it is the image of Ekerot's Death -- ominous white face hidden beneath a black cloak -- that endures so vividly.

The Grim Reaper also plays a key role in the following works:

­Funny or scary, man or woman, the Grim Reaper will likely remain a staple of our pop culture diets. But even if storytellers grow tired of dealing with death and dying, the Reaper will wait patiently in the shadows -- and come for each of us in the end.