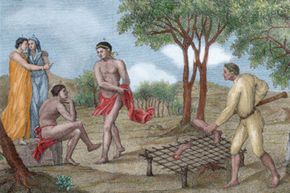 Wendigo stories were Native American legends thought to have been told to ward off cannibalism.
Danita Delimont/Gallo Images/Getty Images

Four men went into the Siberian wild and only two came out.

Intent on a two- or three-week fishing trip deep within Russia's desolate Far East, four men became marooned as their Jeep sunk into floodwater in August 2012.

Details about the ensuing events are sketchy. The men made a mobile phone call in September. They left a note at an empty gold miner's cabin in October. In November, rescuers began searching. By December, two of the men were rescued.

The surviving men reported they'd subsisted on fried animal skin, moss and sawdust in minus 30 degree Celsius (minus 22 degrees Fahrenheit) temperatures. But there seemed to be a few glaring omissions in their stories, particularly the fact that half their fishing party had vanished.

Some began to suspect the survivors had sealed the fate of their missing comrades -- by killing and eating them. Case in point: Police found a partially cannibalized corpse thought to be one of the two missing men; the other man has yet to be located [source: The Siberian Times].

What would you do if you were starving? Not just "I can't wait until lunchtime," but so deprived of food that you were going to die. Would you become a cannibal to survive?

This is the dilemma at the heart of the wendigo legend, which describes people who turned to human flesh in a bid to survive and then transformed into a fearsome and towering man-beasts with an insatiable appetite for human flesh [source: American Monsters].

Like other mythological beasts, tales of the wendigo have been recorded by native cultures, explorers and missionaries for centuries. Stories of wendigoes have fed the imagination of modern authors, illustrators and filmmakers, not to mention the occasional trick-or-treater. No wendigoes were at work in the case of the Siberian men, but it is the kind of scenario one could imagine them operating in.

So, when did wendigoes first intersect with humans, and why did fear of these creatures play a crucial role in tribal life? We'll explore the answers to these questions in this article. First, however, let's take a closer look at this bloodthirsty behemoth. 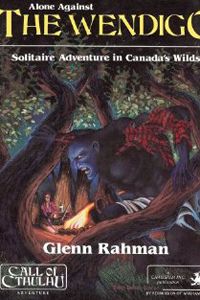 Cover of a paperback showing an illustration of a wendigo.
Amazon

The wendigo is a purely North American monster. Tales of this mythical creature originated with Native-American and Canadian tribes, and played an important role in tribal life.

Known also as a windigo, wiindigoo and witiko, the wendigo was a mainstay in Native-American folklore. The first wendigo was said to have been a warrior who made a deal with the devil. In exchange for the fearsome skills and stature to outfight his enemy, and therefore save his tribe, the warrior gave up his soul. When the battle was over, the successful warrior -- now a full-time wendigo -- was banished from his tribe and forced to live as an outcast. To add insult to injury, he was cursed with cannibalistic desires.

A man-beast towering 15 feet (4.6 meters) tall, the wendigo's malnourished body sported glowing eyes, dog-like teeth, a long tongue and no lips. Its gray skin sagged off its skeletal frame, which smelled of decay. Some accounts give the wendigo antlers, and most describe hands and feet with dagger-like talons. And, no matter how much human flesh it consumed, it was always starving. Some accounts report the beast's body -- and its hunger -- grew in proportion to the amount of flesh it ate [sources: American Monsters, Unknown Explorers].

Variations of wendigo transformations told by explorers and missionaries as early as the 17th century, tell of other ways ordinary people encountered this gruesome transformation. Some turned into a wendigo after encountering it in the wilderness; others after becoming possessed by the creature in their dreams. Still more note a fleeting glimpse of a gruesome creature or take in its unfamiliar, rancid scent before a death among them occurs.

Native-American tribes perpetuated the notion that if a person ate human flesh, he or she would be transformed into a wendigo. It was a tale that played an important role in tribal life.

Tales of the Wendigo -- Real or Myth?

Often plagued by extreme cold and hunger, members of Native-American tribes living in Canada and near the U.S. Great Lakes must surely have considered cannibalism to survive. Not coincidentally, this is the primary region where the wendigo is believed to roam through backwoods and the occasional boudoir.

Stories of wendigoes served as cautionary tales, to deter those who might be tempted to dine on their family members or neighbors during long winters when food was scarce. Wouldn't it be effective to warn your cohorts off cannibalism if the consequences were to turn into loathsome, demonic monsters? Even the wendigo's visage, often described as devoid of lips or other soft tissue, was probably a nod to enduring the ravages of frostbite [source: Unknown Explorers].

Like other indigenous folklore, the wendigo may have faded into anonymity as the tribes' cultures were subverted into the broader Canadian society. In 1907, however, a series of events cemented the wendigo's place in history.

In 1907, Algernon Blackwood wrote a shorty story called, "The Wendigo." Within its pages, he recounted a hunting party venturing into the Canadian backwoods and returning profoundly changed by an encounter with a wendigo [source: Algernon Blackwood].

At about that same time, a member of the Cree tribe of northwestern Ontario named Jack Fiddler told a Methodist minister about his ability to defeat wendigoes. Word spread of Fiddler's self-proclaimed abilities. A shaman, Fiddler said he had killed 14 wendigoes during his lifetime and insisted his actions -- snuffing out locals before they turned into wendigoes -- saved the lives of many. Jack Fiddler and his brother Joseph were arrested and imprisoned for killing a woman before she transformed. Jack escaped and hanged himself; Joseph died of consumption just days before he would have been released on appeal [source: Dictionary of Canadian Biography].

The Fiddler killings lent credibility to the notion that wendigoes were real. But they also point to a myth evolving from the eradication of physical or mental illness; the murder and quarantined disposal of wendigo bodies may have stopped the spread of disease or silenced the mentally ill. Read to find out how one stops this horrible creature.

A mental illness that manifests itself in a hunger for human flesh, wendigo psychosis could be a cannibalistic delusion or a condition completely fabricated. Swift Runner, a member of a Cree tribe in the 1800s who ate his family while living within 25 miles (40 kilometers) of the nearest supply post is one infamous story. Anthropologists have struggled to find proof of specific instances of cannibalism, instead believing "Wendigo" to be a catchall term for mental illness among indigenous tribes in North American and Canada [source: Inglis-Arkell].

How to Escape or Kill a Wendigo

According to legend, it's nearly impossible to escape a wendigo. Hunters by nature, wendigoes are extremely fast and allow nothing to get in the way of their never-ending hunger. Even if you could escape physical damage (which is unlikely), the very fact that you'd encountered an otherworldly wendigo would leave you mentally vacant. Wendigoes hibernate for months or years but woe betide when they awaken.

Wendigoes can stealthily stalk victims for extended periods, thanks to supernatural speed, endurance and heightened senses such as hearing so profound they can pick up on panicked heartbeats from miles away. This skill comes in quite handy in the woods, no doubt.

Once the chase begins, wendigoes engage in a torturous game. They bait their prey, release shrieks or growls, and sometimes mimic human voices calling for help. When the hunt begins in earnest, a wendigo becomes all business. It will race after its prey, upending trees, creating animal stampedes (and thus more famine), and stirring up ice storms and tornadoes.

Don't be fooled into believing you're safe indoors. The wendigo can unlock doors and enter homes, where it will kill and eat the inhabitants before converting the cabins into wendigo domiciles for hibernation.

If you can't outrun a wendigo, can you outgun it? Not easily. A wounded wendigo simply regenerates. The trick is to employ silver bullets, or a pure silver blade or stake, and strike right through the wendigo's ice-cold heart. (Note: It's widely believed a silver-covered steel blade could work if you're in a pinch.)

Upon wounding the wendigo's heart, you must take care to shatter it into pieces, then lock the shattered heart in a silver box and bury it in a church cemetery.

Not one to seek a simple end, the rest of the wendigo must be dismembered with a silver-plated axe so you can salt and burn the body, and then scatter its ashes to the winds. Or, as a second option, bury the pieces in a remote location (a la Harry Potter's attempt to reclaim Salazar Slytherin's locket from the subterranean lake).

Skip a step and the wendigo may be able to resurrect itself, hunt you down and inflict a slow and agonizing death [source: Monstropedia].

Wendigoes continue to haunt us, although not usually in the wilderness. They've become video game characters in "Final Fantasy," "The Legend of Dragoon" and "The Secret World," and been given life in role-playing games like "Dungeons & Dragons." Marvel Comics has created Wendigo personas, and Stephen King included a Wendigo in his novel, "Pet Sematary." More recently, television shows such as "Grimm" and "Hannibal" have featured wendigoes.

Ah, the wendigo. Reminds me of stories my husband tells of his childhood at U.S. Air Force in Japan, when tales of the Kappa wove itself into his earliest memories. The Kappa, a river monster based loosely on the Japanese giant salamander, had a beak for a mouth and was known for kidnapping children. Riffing on the legend, fear of the Kappa was used to reinforce all types of behavior. In my better-half's case, it meant wondering whether the Kappa would come after him if he didn't finish his dinner. All in good fun, to be sure, but an enduring childhood recollection.