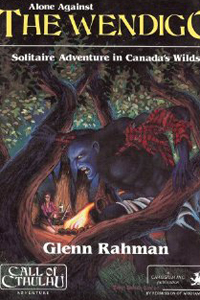 Cover of a paperback showing an illustration of a wendigo.
Amazon

The wendigo is a purely North American monster. Tales of this mythical creature originated with Native-American and Canadian tribes, and played an important role in tribal life.

Known also as a windigo, wiindigoo and witiko, the wendigo was a mainstay in Native-American folklore. The first wendigo was said to have been a warrior who made a deal with the devil. In exchange for the fearsome skills and stature to outfight his enemy, and therefore save his tribe, the warrior gave up his soul. When the battle was over, the successful warrior -- now a full-time wendigo -- was banished from his tribe and forced to live as an outcast. To add insult to injury, he was cursed with cannibalistic desires.

A man-beast towering 15 feet (4.6 meters) tall, the wendigo's malnourished body sported glowing eyes, dog-like teeth, a long tongue and no lips. Its gray skin sagged off its skeletal frame, which smelled of decay. Some accounts give the wendigo antlers, and most describe hands and feet with dagger-like talons. And, no matter how much human flesh it consumed, it was always starving. Some accounts report the beast's body -- and its hunger -- grew in proportion to the amount of flesh it ate [sources: American Monsters, Unknown Explorers].

Variations of wendigo transformations told by explorers and missionaries as early as the 17th century, tell of other ways ordinary people encountered this gruesome transformation. Some turned into a wendigo after encountering it in the wilderness; others after becoming possessed by the creature in their dreams. Still more note a fleeting glimpse of a gruesome creature or take in its unfamiliar, rancid scent before a death among them occurs.

Native-American tribes perpetuated the notion that if a person ate human flesh, he or she would be transformed into a wendigo. It was a tale that played an important role in tribal life.