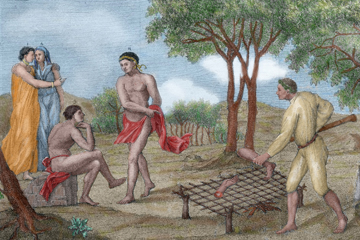 Wendigo stories were Native American legends thought to have been told to ward off cannibalism.
Danita Delimont/Gallo Images/Getty Images

Four men went into the Siberian wild and only two came out.

Intent on a two- or three-week fishing trip deep within Russia's desolate Far East, four men became marooned as their Jeep sunk into floodwater in August 2012.

Details about the ensuing events are sketchy. The men made a mobile phone call in September. They left a note at an empty gold miner's cabin in October. In November, rescuers began searching. By December, two of the men were rescued.

The surviving men reported they'd subsisted on fried animal skin, moss and sawdust in minus 30 degree Celsius (minus 22 degrees Fahrenheit) temperatures. But there seemed to be a few glaring omissions in their stories -- particularly the fact that half their fishing party had vanished.

Some began to suspect the survivors had sealed the fate of their missing comrades -- by killing and eating them. Case in point: Police found a partially cannibalized corpse thought to be one of the two missing men; the other man has yet to be located [source: The Siberian Times].

What would you do if you were starving? Not just "I can't wait until lunchtime," but so deprived of food that you were going to die. Would you become a cannibal to survive?

This is the dilemma at the heart of the wendigo legend, which describes people who turned to human flesh in a bid to survive and then transformed into a fearsome and towering man-beasts with an insatiable appetite for human flesh [source: American Monsters].

Like other mythological beasts, tales of the wendigo have been recorded by native cultures, explorers and missionaries for centuries. Stories of wendigoes have fed the imagination of modern authors, illustrators and filmmakers -- not to mention the occasional trick-or-treater. No wendigoes were at work in the case of the Siberian men but it is the kind of scenario one could imagine them operating in.

So, when did wendigoes first intersect with humans, and why did fear of these creatures play a crucial role in tribal life? We'll explore the answers to these questions in this article. First, however, let's take a closer look at this bloodthirsty behemoth.