What is the angel hair phenomenon? 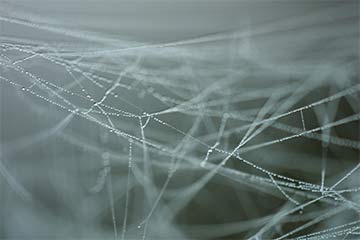 No scientist has been able to collect angel hair, but from the descriptions, they guess that it might be cobwebs.
Photos.com/Thinkstock

Here's a pro tip: When writing about a phenomenon largely associated with conspiracy theories and UFO sightings, don't find yourself plum surprised to see that you're having a heck of a time finding reputable news sources and research upon which to base an article. Instead of tsking with disappointment, try a different approach and just explain -- from the beginning -- that "resources" about the topic at hand might have an agenda beyond mere reportage.

So here we go.

As described by those who claim to have observed such things, the angel hair phenomenon occurs in the form of wispy strands of a substance falling from the sky without ready explanation. But don't you worry, because there are lots of people eager to explain it anyway. Some claim they are signs of aliens or angels, while still others are eager to blur the distinction and say the "hair" is from angelic aliens [source: Crystal].

The phenomenon has been spotted in France, Finland and Canada, and one of the hallmarks of the stuff appears to be that the feathery strands evaporate before anyone can actually analyze or study them [source: Waugh]. That's super inconvenient for those of us who really badly want to touch the wisps for ourselves, especially since in some cases it's reported that the threads became gelatinous on contact before disappearing or even rising into the sky again (like an angel or a UFO).

But conspiracy theorists have their own brand of interesting, and some have determined that the angel hair is proof of chemtrails, those nasty biological weapons that the government and aeronautics industry are using to poison us and the land. (Just to be clear: source unverified.)

Let's take a look at a recent example of angel hair being reported, this time in Portugal. The thin strands rained down in 2014, two weekends in a row. One anonymous (and lone) quote from the incident came from a witness who claimed to have gotten a sample analyzed, only to see it come "alive" under UV light. Of course, there was no report on what that meant, or where the sample ended up [source: Waugh].

One explanation that is less conspiracy and but still creepy? Some spiders actually migrate on airborne cobwebs, sometimes in large groups. The webs sometimes rain down, causing anyone reading this to have nightmares forever about raining spiders. Another possibility is that electricity in the atmosphere polarizes dust, causing the particles to stick together in long strands [source: Doherty].

It's probably aliens, though.