Did the Colossi of Memnon used to sing at sunrise? 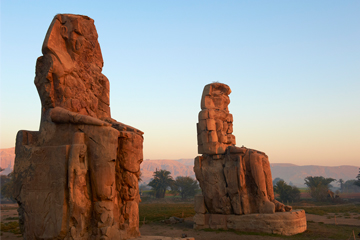 Centuries ago, people thought that the high-pitched noise emanating from the Colossi was the sound of a mother, Eos, crying for her son, Memnon.
© Tuul & Bruno Morandi/Corbis

It's not really my job to tell you the most intriguing part of the story, but I think the headline begs the question: "Used to" sing at sunrise? I mean, it's one thing to be asked if an ancient stone ruin sings at sunrise. That pretty much leaves you able to smile politely and say, "Well, that seems unlikely, doesn't it?" A monument doesn't sing, unless it's some sort of animatronic Chuck E. Cheese monument. But if you're implying that the monument doesn't sing now -- duh, see above -- but it might've sung at one time ... now I'm interested. So what's the deal? Can tons and tons of quartzite stone sing, and why would it stop?

A little background on the Colossi of Memnon first. (Maybe it'll give you some clues to help solve the singing mystery before the secrets are spilled.) These two huge statues were originally built in the 14th century B.C.E. as part of a mortuary temple for Egyptian ruler Amenhotep III [source: Sourouzian]. The Colossi are located in what's now Luxor, Egypt, but it was called Thebes -- the capital of the Egyptian empire -- at the time. And if you're wondering why we're calling them the Colossi of Memnon instead of the Funerary Temple of Amenhotep III or something, you should recall that when Alexander the Great came into power in 332 B.C.E., he pretty much took over everything (including Egypt). Greeks and Romans started to come in to see the sights, and that's how the Greek figure Memnon came to be associated with the place -- and the mysterious dawn-song.

Memnon was a mortal Greek from Homer's "Iliad." After his death, his mother Eos (the goddess of dawn) lamented his death by shedding tears -- or dew drops -- every morning [source: Struck]. The Colossi at Memnon were so named because there really was a time when, on some days at dawn, one of the statues would give off a high-pitched sound. Greeks, and later Romans, attributed the "singing" to Eos, Memnon's mother, mourning for her son. So the singing Colossi of Memnon were named for Eos' dead son and attracted many tourists interested in hearing her wails.

OK, let's back up, because you're probably wondering how, exactly, the Colossi sang (or made singing-like noises). And the truth is, the statues didn't always sing, and as we said before, they don't sing anymore. One of the colossal statues sang after an earthquake destroyed part of it in 27 B.C.E.; there was no sound before that. So, wait: Magic is real?

Nope. Scientists and researchers think that the cause of the sound was due to a rise in heat and humidity, playing off one large, cracked stone. The evidence: When a Roman emperor, Septimius Severus, repaired the earthquake damage in the first or second century, the sound disappeared.

So you bet: The Colossi of Memnon used to sing occasionally at sunrise, by all accounts.