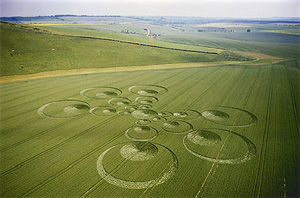 Crop circles are not just circles -- they can come in many different shapes. The most basic (and the most common) crop circle is the single circle. Circles may also come in sets of two (doublets), three (triplets) or four (quadruplets). Circles also may be enclosed in a thin outer ring.

Crop circles can range in size from a few inches to a few hundred feet across. Most early crop circles were simple circular designs. But after 1990, the circles became more elaborate. More complex crop patterns, called pictograms, emerged. Crops can be made to look like just about anything -- smiling faces, flowers or even words. Crop circles are sometimes unique designs, but they can also be based on ancient motifs.

Some of the more sophisticated patterns are based on mathematical equations. Astronomer and former Boston University professor Gerald S. Hawkins studied several crop circles and found that the positions of the circles, triangles and other shapes were placed based on specific numerical relationships. In one crop circle that had an outer and an inner circle, the area of the outer circle was exactly four times that of the inner circle. The specific placement of the shapes indicates that, whoever the circlemakers are, they have an intricate knowledge of Euclidean geometry (the geometry of a flat surface introduced by the mathematician Euclid of Alexandria).

Some circles have thin lines leading away from them. These lines, called spurs, are not actually a part of the circle. They are created by the farmer's tractor.

In 1987, a crop message read "WEARENOTALONE." Skeptics argued that if the message had been from aliens, it would have read "YOUARENOTALONE."