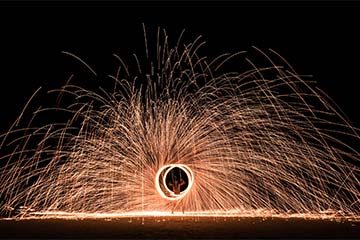 Are there people who can really start fires with just their minds?
ViewApart/iStock/Thinkstock

There's probably a reason why most people choose the ability to fly or be invisible when choosing a superpower. Like, being wolverine might sound kinda cool, but it would probably get old when people are trying to hurt you all the time just to watch you heal before their eyes. The Flash could be fun -- but exhausting. Who wants to do all that running? Batman doesn't have any superpowers, except for being so rich that dressing up as a bat is deemed acceptable.

The ability to control fire -- pyrokinesis -- sounds pretty decent on the surface. But apart from camping, is it really that awesome to be able to light fires everywhere? And how tiring would it be to feel like you constantly have to rush to every house or wildfire to help control the flames? For these reasons and more, let us be grateful that pyrokinesis is purely the stuff of fiction.

And it totally is, right? Well, not according to urban legend and a few vague news stories. A little girl in the Philippines, for one, was reported to be able to predict fires and possibly start them just by mentioning their existence [source: GMA]. Then there was the 11-year-old girl in Vietnam that supposedly set so many things on fire without physical action that her parents finally got fed up with it and sought help (as if having a preadolescent isn't tough enough) [source: Thanh Nien News].

Perhaps now is a good time to note that (sorry, everyone!) pyrokinesis isn't a real thing. Whatever was happening with those girls was not a case of starting fires with their minds. Because here's the thing: Our brains just can't generate enough energy to ignite any object. Now, a lot of these rumors about mind-fire started with authors. Stephen King actually coined the phrase "pyrokinesis" when writing "Firestarter" in 1980, but even Charles Dickens stoked readers to believe that a character died of spontaneous combustion after a heavy night of drinking [source: Wolff].

Some speculate that a subatomic element -- the pyrotron -- is actually the cause of pyrokinesis, and even spontaneous combustion. The theory is that this tiny element buzzes through one's atoms, and if it happens to hit a quark, the big bang basically happens inside you, which causes internal combustion of some sort [sources: Wolff', Arnold].

Bu this just doesn't check out. For one, no one has ever seen any quarks -- we just know they exist because lots of particle physics doesn't make sense without them. So, adding in this idea of them colliding with each other is a stretch. Second big problem? The pyrotron doesn't exist. At all. There has never been an "Oh, this is the subatomic particle that explains how some people control fire with their minds" model of particle physics. And why not? Because pyrokinesis has never been proven to exist. Case closed.

How Stonehenge Worked
What is the anthropic principle?
Why Do We Have Leap Years?