What's the Zone of Silence? 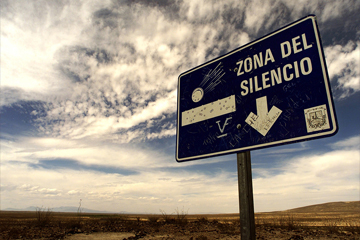 A road sign points the way to a patch of northern Mexican desert known as the Zone of Silence.
© Reuters/Corbis

When it comes to conspiracy theories, there's a big difference between some harmless urban legends and a dangerous or potentially threatening belief. If I were to tell you that meteorite detritus rains down on the earth in a wispy web, you might think it's a spooky phenomenon and tell all your friends on the playground [source: Doherty]. However, if you were to believe that space aliens made the ancient Peruvian geoglyphs called the Nazca lines -- and then you trampled over them in an attempt to collect "samples" -- your fun little hobby would now be seriously damaging to the archaeological record [source: Golomb].

So with that being said, there's two ways to approach the Zone of Silence (or La Zona del Silencio), the infamously "mystical" spot in the Mapimí Biosphere Reserve in Durango, Mexico. On one hand, we could have fun with it and talk about the legends that abound -- that radio and television signals become scrambled in the area; that compasses refuse to function or that large people are spotted before disappearing into thin air. Perhaps the most titillating tale is the missile that was launched in the U.S. and mysteriously ended up landing right plop in the middle of the Zone of Silence -- 400 miles (644 kilometers) south of its intended target [sources: Corrales; Kaus]. No coincidence, some of you might crow -- conspiracy!

But then there's the far more damaging side of continuing the myth. And let's just establish now that it is, in fact, myth -- starting with that missile. True, the missile did somehow land in the area in 1970. But that was where all the trouble began. Instead of being straightforward, the U.S. government hired a group of locals to "guard" the missile, keeping its location and details a secret while American workers rigged up a complicated system to dig it out. After they left, it seems that somebody decided that advertising the area as a location for strange and unusual happenings was a good way to drum up a little tourism money. The Zone of Silence was born, spurred on by tales of unusual animals, plants and even some "communications" from other worlds [source: Kaus].

So what's the harm? Considering that most of the people in the area are trying to raise livestock or ranch, having tourists tramping through their land isn't entirely helpful (especially if they're opening gates or fences). The Mapimí Biosphere Reserve also houses a research station that studies the ecology of the area, and that research is hindered by -- let's be straight -- crazy people looking for aliens. Collecting their own "samples," leaving trash and generally showing environmental ignorance is no way to "communicate" with the other world in the Zone of Silence, people. And let's be clear that the researchers actually working in the region have never had problems with radio signals or compasses [source: Kaus].

Let's settle, then, on a definition. The Zone of Silence is a made-up mystical area in the Chihuahuan Desert, but it's also a physical place that's important to the livelihood of its residents and researchers. Act accordingly.