What are the Nazca lines? 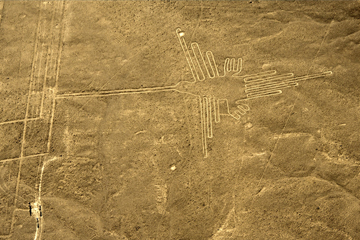 You're looking at an aerial view of a hummingbird, one of the most well-preserved figures (305 feet or 93 meters long) of the  Nazca lines.
Martin Bernetti/AFP/Getty Images

Let's start with the bad news. When we ask what the Nazca lines are -- those light, colored etchings that mark the desert soil of southern Peru -- we are not going to receive an entirely satisfying answer. The Nazca lines (sometimes spelled "Nasca") are still a mystery, and Peruvian anthropologists only have some strong guesses about why the Nazca lines exist and what purpose they serve.

Here's the good news: We do have a pretty clear understanding of how they were made, and even the disproven theories about how the usage of the lines have helped us gain a deeper understanding of what their real purpose might've been. But let's begin our mystery like any good detective and start with the facts.

We refer to the drawings as geoglyphs, which include any symbol or sketch imprinted onto the landscape. In the arid deserts of Peru (where it rains less than in inch a year), the rocks have oxidized to a rusty brown. If you were to remove a foot or so of soil, however, you'd find sand the color of chalk underneath [source: Golomb]. Early Peruvian peoples -- which include the Paracas, who were actually around earlier than the Nazca -- discovered that the white sand contrasted nicely with the dark background and began making the lines at least 1,000 years ago. So, some of these lines originated with the early Paracas culture, with some later drawn over by the Nazcas. Even the ones that carried over from one group to the next were probably not all used for the same purpose. Regardless, nobody is quite convinced either culture just made them for a lark.

The theories about why the lines exist have evolved since they were first "discovered." When the lines first drew study in the 1920s and '30s, the general belief was that they had to do with some sort of astronomical or celestial marking system. But those theories have since been pushed aside for an intriguingly practical hypothesis.

Instead of marking an equinox or comprising some sort of calendar, the lines are now believed to have been a kind of map that led to ritual sites. Archaeological discoveries -- such as altars -- give us hints that the lines were used as pathways to ceremonies. The ceremonial plea? Probably for water, as the land became more and more arid throughout the Nazca civilization [sources: Golomb; Hall].

One other cool note: It's long been assumed that the Nazca lines were only "seen" after the advent of flight. But the original lines were actually put on hillsides for the earliest people to observe easily from valleys. By the time the Nazca arrived, the lines had slowly migrated into the plain [source: Hall].