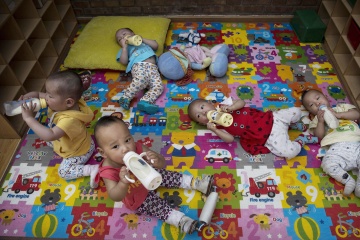 In this photo, orphaned children drink milk at a Chinese foster home. Ironically, China may have been able to slow the growth of its population just as effectively if it hadn’t implemented a one-child policy.
Kevin Frayer/Getty Images

Back in 1979, China was dealing with the fallout from an unprecedented period of population growth, its population having doubled to 1 billion in just 30 years. That was a quarter of the world's population living on just 7 percent of the world's farmable land [source: Wang]. It was clear to China's central government that continued unrestricted growth would lead to economic and environmental catastrophes. So, with the support of Chinese sociologists, the government implemented one of the most ambitious population-control programs in the history of the world.

The one-child policy was made of several policies designed to curb population growth, with the goal of a population of 1.2 billion by 2000. In addition to the "one child per family" rule, the policy also provided contraception education and free abortions, as well as more direct approaches, including required IUDs (intrauterine devices) for women who already had one child. In more populous provinces such as Sichuan and Shandong, officials also implemented mandatory sterilization for couples who already had a child. The result was a steep drop in fertility from 1979 to 1983, from an average 2.92 children per woman to 2.42. Those who violated the policy were subject to fines and denied access to education. The government almost reached its goal — China's population at the turn of the century was 1.27 billion [source: Wang].

The success of the policy in the 1980s led to a relaxation of the fertility restrictions. Mass sterilization ceased, and couples were allowed to have a second child in certain circumstances, such as when their first-born child had birth defects or, in rural areas, when their first child was female. However, in 1991, after a slight increase in the fertility rate, officials reimplemented mandatory IUD insertion, and the birth rate stabilized around 1.77 children per woman [source: Wang].

One possibility is ... very little, at least in terms of total population. While the Chinese government says its population would be 250 million to 300 million larger now if not for its one-child policy, previous population-control measures actually had been working well. In the decade before the one-child system, voluntary education programs like the "late, long, few" initiative promoted having children later in life and lengthening the time between pregnancies. These efforts cut the fertility rate in half, from 5.9 children per woman to 2.9 [source: Hesketh]. Alternative, less coercive methods of birth control might have had the same effect on population growth, minus the trauma related to mass sterilizations.

Critics also blame the one-child policy for a marked gender imbalance. Between 1979 and 2001, the ratio of males to females in China increased from 1.06-to-1 to 1.17-to-1. In some rural areas the ratio was as high as 1.3 men for every woman [source: Hesketh]. That's one lonely heart consigned to bachelorhood for every three or four marriages. Poor guy.

This is a serious problem in a society where marriage is expected. Social status rests partly on the ability to marry and have children, and in areas where the gender scales are the most unbalanced, scarcity allows women to marry into higher socioeconomic status, leaving less desirable men at the bottom rung of society with no way to climb up.

A large group of disenfranchised men is cause for worry: Young single men of low economic status are responsible for most crime globally. Yet there's been no evidence that bachelors in China are responsible for an increase in violent crime [source: Hesketh]. That doesn't mean a skewed gender ratio hasn't been harmful, though. When researchers interviewed bachelors in Guizhou, an area where the ratio of unmarried men to unmarried women is 1.9-to-1 for people aged 20 to 24 and an alarming 75-to-1 for people aged 35 to 39, they found that most men described themselves as "aimless, hopeless, miserable, sad, angry and lonely" [source: Zhou]. And while you might imagine the gender imbalance would benefit women at lower socioeconomic levels by giving them a way out of poverty, in too many cases it benefits the men. The sex industry tends to explode in situations where women are scarce, and prostitution, kidnappings and human trafficking have risen in China since the first generations with out-of-whack sex ratios became adults [source: Tucker].

But is the one-child policy responsible for the imbalance? Maybe. Birth-order data suggests parents were taking advantage of cheap ultrasounds — newly available around the time when the gender scales truly began to tip — and terminating pregnancies when the fetuses were female. Between 1980 and 2001, the sex ratio for firstborn children was 1.06 males for every female, 1.24 for the second child, 1.28 for the third, and 1.31 for the fourth child and beyond [source: Hesketh].

The catch is that data from other countries that never employed such severe measures for population control show patterns similar to those in China. Nations with declining fertility rates and access to prenatal ultrasound show a similar preference for male children. In Taiwan, for instance, the male-to-female birth ratio is 1.19-to-1. In South Korea it's 1.12-to-1. In some areas of Northern India, it's 1.20-to-1. In Liechtenstein, it's a whopping 1.26-to-1 [sources: Hesketh, World Factbook].

The takeaway: Had China's central government chosen to stay the course after the 1970s and address overpopulation through education and access to health services for pregnant women, it might have achieved the same results — without making anyone's birth control decisions.

What if You Really Ate 50 Eggs Like in 'Cool Hand Luke'?
10 Famous Paranormal Hoaxes
What If the Amazon Rainforest Is Completely Destroyed?