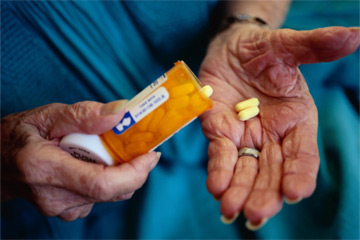 What if that pill in your hand could cure cancer?
Steve Mason/Photodisc/Thinkstock

Medicine can prevent polio and heal stomach ulcers, but what if it could successfully nip all diseases as soon as they showed themselves? Preposterous, isn't it? Incurable sickness is a part of everyone's life. Who hasn't stayed home with the flu? Of course, some people lose more than office sick days to illness, like their ability to walk, their vision or even their life or that of a loved one. In this article, we'll consider a world where every disease has a cure.

It's tough to imagine. Cures for everything sounds great, but what does that mean? First, it doesn't equate to prevention. For example, to protect yourself from getting HIV, you could, among other things, abstain from having sex and from sharing needles or have protected sex. Second, cures differ from treatments: HIV therapies can reduce the amount of virus in the body or help the recipient physically cope with a weakened immune system. For our purposes, a cure for HIV would mean that you could have the virus, take a pill and then no longer have the virus in your body.

Life with unlimited medical fixes … would doctors' offices be swamped by patients clamoring for pills? Would people live unthinkably long?

Although it's fun to ask "what if…," we should balance our fantasy with some skepticism. Could we ever achieve remedies for all diseases? Not likely. Each age bracket comes with its own illnesses. Even if we could extend the human life span to 200 by preventing maladies that kill us before we reached that age, it wouldn't be a healthy 200, but one that came with its own ailments, maybe some we've never seen before [source: Kennedy].

Another factor to keep in mind: Wealthy and poor countries have such different common diseases that we'll look at the scenario separately in each place. First up, a high-income nation where everyone's heart is healthy, even after all-you-can-eat burgers and fries.

The top cause of death in wealthy countries is coronary heart disease (CHD), according to 2008 data from the World Health Organization. That fact is a product of the long life span and lifestyle characteristic of high-income nations. In our hypothetical world, there would be a cure for CHD. You could eat steak subs every day, but with the help of a pill, your arteries wouldn't clog.

Another pill would protect smokers, people with high blood pressure and diabetics from strokes, the second-largest killer in rich countries [source: WHO]. If you assume people are inherently pleasure seekers, you'd expect them to eat whatever they wanted, exercise less and smoke more in a world full of magical medical bullets.

More people also might light up because lung cancer and related cancers, the third leading cause of death in rich countries, would be curable [source: WHO]. Not that smokers necessarily would live excellent lives. Many would be diagnosed with lung cancer, take a pill and then get lung cancer again. They'd have to cyclically solicit treatments for their smoking-related problems.

So far, this hypothetical world looks pretty bad -- that is, until we consider modern incurable diseases. Children with cerebral palsy or muscular dystrophy could choose a different life, if they wanted. AIDS patients could swap a succession of hospital visits and expensive drugs for an immediate, sweeping fix.

Not only would our experiment imagine away the big burdens, but also the little annoyances, like colds, ear infections and the flu. Since all of these ailments are viral, today's best efforts typically center on treating the symptoms and waiting for your body to clear the infection [source: Fauci]. In our what-if world, you'd spend fewer days suffering and miss less work or school.

What if mental illnesses became curable? Sure, many mental illnesses are controllable, sometimes to the point that the people who have them don't notice them, but for the top three mental illnesses in the United States -- anxiety disorders, depression and attention deficit hyperactivity disorder -- there can be a period of chaos before control is achieved, and control can involve lifelong medication or worries about relapse [source: Kessler]. Cures could lead to a better quality of life. We also suspect that by alleviating mental illness two institutions would lose residents: hospitals and jails [source: Harcourt].

Rich countries have a tidy system of doctors, hospitals, pharmacies and emergency crews. How would it change if every disease had a cure? If the medical system were interested in keeping the most people healthy, it might expand screening. Medical establishments tend to invest in screening when catching a disease early really helps the patient, as with breast cancer. In our world of cures, doctors would be trying detect all diseases early, except no country could afford to do that. So, the public and every other interested party you could imagine would fight over how much to spend and which illnesses to include.

We'll take all these hypothetical cures to a low-income nation next.

The top three causes of death in wealthy countries are preventable. You can steel yourself against coronary heart disease and strokes through diets low in fat and salt, exercise and the decision not to smoke. To prevent tobacco-related cancers, you can avoid cigarettes and smokeless tobacco.

Can Humans Have Superpowers?
Is 'Jim Wilson' Airline Code for a Dead Body on a Plane?
Do fish ever really rain from the sky?