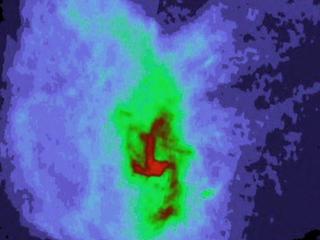 When Alice falls into the rabbit hole, she experiences a host of "curiouser and curiouser" phenomena. She gets smaller, she gets bigger, she almost drowns in a sea of her own tears and she meets an assembly of strange creatures. As it turns out, falling into a black hole may rival the strange experiences described by Lewis Carroll in his classic fantasy. Unlike Alice, however, who emerges from her adventures no worse for the wear, a person who journeys into one of the universe's most mysterious objects is not likely to fare so well. To understand why, it will help to define what a black hole is and how it interacts with the universe around it.

Astronomers have only observed black holes indirectly, yet they can paint a clear picture, albeit one based on circumstantial evidence. They feel certain, for example, that black holes indicate regions where matter has been compressed into an infinite density. The gravity of such a region is so strong that nothing can escape its inexorable pull, not even light. As matter and light fall into the superdense region, X-rays and other forms of electromagnetic energy get blasted into space. It's this cosmic ejecta that alerts astronomers to the existence of these mysterious monsters.

Like monsters we can see, black holes come in different sizes. Astronomers measure this using something known as the Schwarzschild radius. That radius describes the size of the event horizon, the spherical boundary of a black hole. The greater the object's mass, the larger its event horizon and the larger its radius. Regardless of how massive it is, a black hole's center point is what astronomers call a singularity -- a place where matter is infinitely dense.

Of course, you'll have to find one of these objects if you're going to fall into it. We'll search for one next.