What If You Eat Moldy Bread?

by Karen Kirkpatrick
NEXT PAGE
Just because penicillin comes from moldy bread doesn't mean you should make sandwiches with it. Perry Gerenday/Getty Images

It's 3 a.m. You're craving a peanut butter and jelly sandwich — or maybe a grilled cheese. You open the bread bag and — ugh! — the bread is blue with mold along one edge. As you're trying to decide whether to throw the bread away, you remember that penicillin is made from mold [source: NLM]. That makes it OK to eat, right? Think again.

Here's the skinny on what might happen if you eat that moldy bread. Molds come from the same family as mushrooms. In fact, if you look at molds with a microscope, you'll see that they often look like little mushrooms: stalks with spores on the top. These spores give molds their pretty colors — such as the blue-green shading lining your now inedible bread [source: USDA].

While molds may be pretty, they can also be harmful. Many varieties — there are hundreds of thousands of molds — cause allergies and respiratory problems. In some cases, molds produce mycotoxins, a poison that makes people, livestock and other animals sick. And guess where one of the most notorious mycotoxins — aflatoxin — grows? That's right: on grains and nut crops — two things that make up many breads [source: USDA].

Aflatoxin, a cancer-causing mold found around the world, is one of the most studied and monitored molds out there. But despite all the attention it gets, this mold has not been eradicated — though manufacturing plants across the globe are monitored to ensure levels of aflatoxin remain within acceptable limits [source: USDA].

But back to the 3 a.m. piece of bread with the mold on one edge. What if you cut off the moldy bits and just eat the rest? Surely that's OK, right? Wrong. What you see on the edge of bread may be only the tip of the mold. From the stalks, mold can shoot roots down into the bread. These roots are where the mycotoxins like to grow. In addition, invisible bacteria that can also make you sick may be tagging along with the mold [source: Nelson].

So, while your high school science teacher was right about penicillin being made from mold, it is not a good idea to try to get this bacteria-fighting agent from moldy bread. The next time you're craving a PB&J or grilled cheese, check out your bread carefully. If there's mold on the surface, you may be better off without a midnight snack. 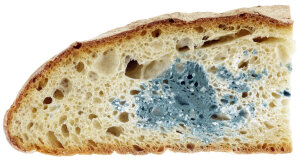 Is moldy food safe to eat? 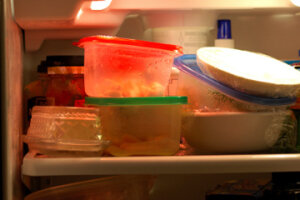 How long can you leave leftovers in the fridge? 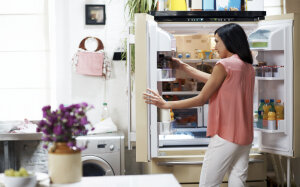