What if people had evolved as birds? 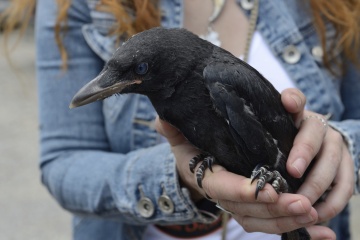 With their capability for complex social reasoning, crows would be good candidates for a species of bird people.
Sergiy1975/iStock/Thinkstock

Humans evolving from birds isn't as crazy as it sounds. Modern humans are unique in the animal kingdom, but the list of evolutionary adaptations that were required to get us where we are is actually pretty short; an advanced brain, cooperative social structure, toolmaking and language to speed up cultural transmission can carry a species a long way. Some bird species are at least partly there. Who knows — if a roll of the evolutionary dice had wiped out early humans, would some other species have achieved our level of success instead? Perhaps most importantly: Would bird people be able to fly? Would we lay eggs?

Among the many intelligent bird species, the best candidate for a humanlike creature probably would come from the genus Corvus. These are crows, ravens and rooks, and they have a lot to work with if they're shooting for humanlike sentience. They're capable of complex social reasoning [source: Black], they know how to make tools, and there's evidence that an area in their brains called the nidopallium caudolaterale gives them some of the abstract thinking abilities that the neocortex does for humans [source: Veit]. As intelligent, tool-making social scavengers, they're quite a bit like we were 2 million years ago. So let's take crows as a starting point and call our new species Corvus sapiens. Corvids for short.

Crows have opposable talons and beaks that are useful for grasping and manipulating objects, but if we're serious about making and using tools, our corvids are going to need some specialized appendages that don't already have a dedicated function. To get there, we're going to have to cheat a little and run the evolutionary clock back to Archaeopteryx, an early birdlike dinosaur with three claws in the middle of its wing. This cluster of bones at the center of the wing could be the base for small manipulating appendages. Backed up by the strength of wing muscles, little hands on a corvid wing could be a reasonable analogue for the human hand and arm. This development would reduce corvids' flight ability, but it also would allow them to make up for the limitation. For example, the claws could be used for climbing trees to roost safely at night.

So would people still be able to fly as corvids? Maybe. Flight has its advantages: It provides larger search areas for food, faster travel and access to places predators can't reach. But if we want big brains, we might have to give it up. Flight musculature, like a big brain, requires lots of calories to maintain. The two probably wouldn't go together, unless their combination gave us access to a very reliable new source of high-calorie food.

And tools might tip the scales toward a total loss of flight. Presumably, toolmaking and tool use would be a mostly terrestrial affair, so if we're privileging (in evolutionary terms) the survival of corvids who are making and using tools, then we're also privileging the survival of corvids who spend a lot of time on the ground. This also might result in the loss of crows' hollow flight bones, the trade-off being increased strength and tool use. The wings themselves, though, would most likely stay. Trees and cliff sides would probably be the nesting grounds of choice, and it would be helpful to keep limited gliding ability to access and leave nests.

Now things get weird, though, because we have to address one of the most obvious differences between primates and birds — eggs. Birds don't get pregnant. Sure, they get their eggs fertilized, but no birds actually give birth to live young. This is rare. Getting pregnant in some form or another is common throughout other parts of the animal kingdom. Mammals do it, of course. Some sharks and other fish do it, in their own way. Even some reptiles, such as boa constrictors, also retain their eggs internally to protect their young. Birds, however, lay eggs without exception. Even in Antarctica, where the cold makes live birth seem like an obvious choice, penguins still refuse to evolve pregnancy. Whatever else corvids would have in common with mammal people, they would lay eggs.

Egg-laying would demand that corvids develop a multilayered social organization. Individual nesting families tended by a lone mother couldn't transmit complex culture without some kind of group behavior. Humans solved this problem by banding together into small, tightly-knit social groups, while the most important early cultural transmissions such as language came (and still comes) from the parent-child bond.

For corvids, those parent-child connections would be much looser. Bird parents do care for their young, but newly-hatched birds bond with whatever they see first that's moving — their mother, another bird or a dangerous snake. If they banded together into tribes, they'd be imprinting on the wrong mother all the time.

This actually might be an advantage for corvids as their society takes shape. Instead of mother-child pairs, any adult could conceivably care for any child — it would be a more extreme and socially-mandated version of what humans do with day care and public schools. "Whoops. Guess I'm your mom" probably would be a phrase that came up a lot.

When humans developed social institutions like marriage they increased the number of parents caring for children, but in corvid society large clutches of eggs could be tended efficiently by multiple surrogates at once without anyone caring who the biological parents were. This could lead to a hierarchical society where some individuals specialized in child-rearing and others in food-gathering, or it could result in an egalitarian society where corvids took turns in roles over the course of their lives. Either way, a corvid family would consist of a generation of fledglings and however many parents had been around during their hatching.

This also would mean that corvids probably wouldn't move around as much as early humans did, even if they had the ability, and they still would have to live in trees even after they started to build their own shelters. They would remain vulnerable to predators, and their relative smallness and arboreal lifestyle would make it hard for them to cultivate a relationship with wolves the way humans did for hunting and protection. They also would be unable to hunt by tiring their prey to exhaustion the way early humans did, lacking hominid stamina and the ability to sweat.

Egg-laying requires a permanent base of operations for at least part of the year, so corvids might combine minimal hunting with shaping their environment to get food. They would start tending to surrounding plants as soon as possible and probably develop agriculture much earlier than humans did. And because they'd have to maintain trees for living space, they would have a less adversarial relationship with the local ecology than we do. It's not a terrible picture, actually. Small, sedentary, black-feathered people, living in tree houses and tending their gardens.

What if everyone in the world recycled?
Quiz: Test Your Knowledge of These Debunked Conspiracy Theories
Do Parallel Universes Really Exist?