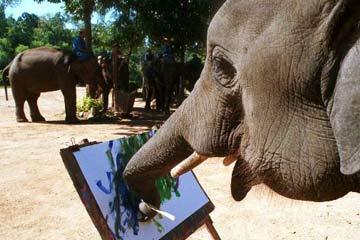 Elephant art has been a sensation for many years. Although the pachyderms are trained to paint -- how to hold a brush with their trunks, how to make strokes on a canvas -- from there, according to an interview with prominent elephant art academy founder Alex Melamid, trainers typically try to stay out of the elephants' artistic domain and let them work in their own individual styles [source: Bukowski].

Melamid said younger elephants are especially fond of painting. Some favor a speedy process, while others take a much different approach, painting in a methodical and unrushed manner, gently doling out drops of paint or pulling down graceful brushstrokes after appearing to carefully consider the progress of their creations.

But does this artwork represent a form of self-expression that could help determine if elephants view the world with humanlike consciousness? And what about self-recognition or self-awareness? While most of the elephants only succeed in mastering abstract painting, some elephants, such as Paya, are able to paint figurative portrayals of elephant forms. So does Paya recognize what he is doing as portraiture (or even self-portraiture), or has he simply learned to fine-tune his skills at depicting the pachyderm form?

Attempting to answer the multitude of philosophical, biological, psychological and neurological questions concerning consciousness has occupied intellectuals for centuries, yet few conclusive verdicts have been reached. Consider these three fundamental and uncertain aspects one can argue about consciousness: What are the different ways in which the word itself can be defined; how do these various interpretations physically and psychologically occur; and, in what manner and to what degree do they manifest (or need to manifest) to qualify as consciousness as most would intuitively understand the concept?

For example, let's look more closely at consciousness as the term applies to our particular query. To demonstrate consciousness, does an organism simply need to perceive the world around it through sensory experiences and respond to those sensations? Does it need to store and comprehend this information so it can relate past sensory data to new situations? Must it be implicitly aware of its own existence, or, to take it a step further, must it have an explicit self-awareness of its place in the world and see itself as an active agent?

On the next page, we'll look at some examples of animals that, while without the necessary language tools to convey their mental perceptions to us, could be displaying signs of consciousness on par with our own. 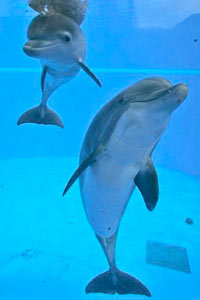 What is the definition of insanity?
How Polyphasic Sleep Works
Can You Be Addicted to Endorphins?