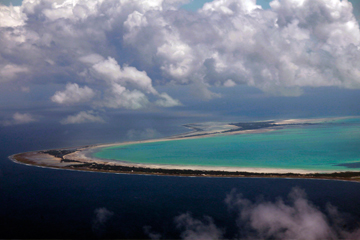 At this point in human history, a 12-inch (30-centimeter) rise in sea levels isn't hypothetical. Instead, it's a matter of when it will happen and what's going to happen afterward.

Sea-level rise stems from two factors, both of which result from climate change: thermal expansion — in which the ocean expands in volume after absorbing some of the heat trapped in the atmosphere — and the melting glaciers, ice caps and ice sheets that deposit into the ocean water that had once been frozen on land. Since the start of the 20th century, experts have measured global sea-level rise to be anywhere from 0.02 inches (0.6 millimeters) to 0.12 inches (3 millimeters) per year. Cautious estimates point to a 12-inch rise in global sea levels by 2100, while some experts predict such an increase by the middle of the 21st century [sources: Union of Concerned Scientists, Plumer].

However, that rise could come sooner or later depending on where you live. According to the U.S. Geological Survey, parts of the U.S. Atlantic Coast are experiencing annual sea level increases at up to 0.14 inches (3.7 millimeters) per year [source: U.S. Geological Survey]. Currents that warm offshore waters, for example, can lead to higher local sea levels. Regional sea levels can also vary because of changes in elevation on the coastline: Some areas of the northern Gulf of Mexico are gradually sinking, a factor contributing to an annual sea-level rise of up to 0.39 inches (10 millimeters) per year [source: NOAA]. Conversely, in southern Alaska, glacial retreat has pushed the land up, resulting in a decline in its relative sea level [source: NOAA].

While the impacts of a 12-inch rise in sea levels will be felt differently around the world, it's safe to say the coastline will feel those impacts first. Low-lying areas are especially vulnerable: Higher sea levels bring more severe high tides and storm surges, resulting in chronic flooding and damage to coastal cities and communities. In response, these communities will have to construct levees, floodwalls and other barriers. According to a study by Nature Climate Change, even a sea level rise of 7.9 inches (20 centimeters) could contribute to $1 trillion of damage every year to the world's coastal cities if no preventative action is taken; the most vulnerable cities would be Guangzhou, China; New Orleans, Louisiana; and Guayaquil, Ecuador [source: Hallegatte et al.].

Along with flood damage, a 12-inch rise in sea levels would drive salt water farther inland, contaminating freshwater drinking supplies and crippling ecosystems that can't survive the increased salinity. Greater coastal erosion could have adverse effects on tourism and recreation. For example, Miami-Dade County in southeast Florida expects to need 10,781 football fields worth of foot-deep sand to replenish its beaches over the next five decades [source: Tompkins and Deconcini]. These factors could also displace entire populations: The low-lying Pacific island nation of Kiribati, for example, could be uninhabitable by 2050 [source: Day].