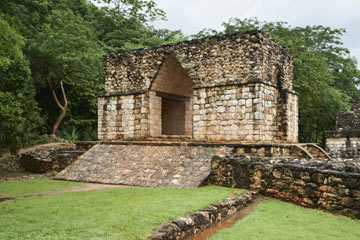 Back in 1929, Col. Charles Lindbergh -- the same aviator who, two years before, had become famous by flying solo across the Atlantic Ocean -- was flying a Pan American Airways plane from Miami to Panama when he decided to do a little sightseeing. Over what is now Belize, Lindbergh abruptly veered inland and flew over a stretch of southern Mexico and Central America that was covered with dense vegetation -- a region so remote and inaccessible that outsiders reportedly had never ventured there. As Lindbergh soared over the trees, something ahead caught his attention -- what an Associated Press account later described as "two emerald eyes staring up at him, out of the tangle of the jungle brush."

As Lindbergh swooped in low to investigate, he was astonished. It was the ruins of a vine-enshrouded city about 8 miles (12.8 kilometers) in diameter, dotted with numerous small pyramids and a 250-foot-tall (76-meter) stone temple with twin reflecting pools -- the green reflection that had looked to him like a pair of eyes. But there were no signs of humanity anywhere around the site. Lindbergh was filled with awe, as he gazed upon the ruined grandeur of a once-mighty Mayan city whose builders apparently had abandoned it to be swallowed up by the jungle [source: Associated Press].

Why? That's a question that that archaeologists, scientists and historians have been puzzling about for decades. During their heyday -- about 250 AD to 900 AD -- the Mayans had one of the most advanced civilizations on the planet. They built more than 40 cities across Central America, filled with temples and palaces and elaborate sculpture and carvings whose magnificence still impresses. They developed advanced irrigation techniques for growing crops, and performed astronomical observations that enabled them to predict solar eclipses. They had a written language of hieroglyphs, which they used to write books on paper made from fig trees. They devised an elaborate calendar, whose cycles ran for centuries into the future [source: Britannica].

And yet, by the time Spanish conquerors arrived in Central America in the early 1500s, the great Mayan cities were empty, and the builders' descendants had reverted to a simple agrarian small-village lifestyle. Over the years, scholars have developed numerous theories about why the mighty Mayan culture collapsed, but recent discoveries point to a cause that sounds eerily familiar -- climate change. In this article, we'll take a look at whether Mayan civilization was undone by weather, and what lessons that might hold for our civilization today.