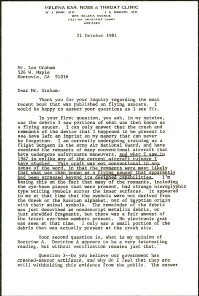 Eighth Air Force Commander Brig. Gen. Roger Ramey, acting under orders from Gen. Clements McMullen at the Pentagon, concocted the weather balloon story to "put out the fire," in the words of retired Brig. Gen. Thomas DuBose, who in July 1947 was serving as adjutant to Ramey's staff. The actual material, all who saw it agreed, could not possibly have come from a balloon.

For one thing, there was far too much of it. For another, it was not remotely like balloon wreckage. Maj. Marcel described it:

[We found] all kinds of stuff -- small beams about 3/8 or a half-inch square with some sort of hieroglyphics on them that nobody could decipher. These looked something like balsa wood and were of about the same weight, although flexible, and would not burn. There was a great deal of an unusual parchmentlike substance which was brown in color and extremely strong, and a great number of small pieces of a metal like tin foil, except that it wasn't tin foil. . . . [The parchment writing] had little numbers and symbols that we had to call hieroglyphics because I could not understand them. . . . They were pink and purple. They looked like they were painted on. These little numbers could not be broken, could not be burned . . . wouldn't even smoke.

The metallic material not only looked but acted strange. It had memory. No matter how it was twisted or balled up, it would return to its original shape, with no wrinkles. One woman who saw a rolled-up piece tossed onto a table watched in astonishment as it unfolded itself until it was as flat, and as wrinkle-free, as the table top. When an acetylene torch was turned on samples of the material, they barely got warm and could be safely handled a moment or two later.

Air Force searchers scoured the recovery site until they had picked up what they thought were all pieces, however minuscule, of the crashed vehicle. Two years later, when Bill Brazel, Mac's son, let it be known he had found a few pieces the soldiers had missed, an Air Force officer called on him and demanded them. He handed them over without argument. Young Brazel knew how serious the military was about all this. After all, in July 1947 the Air Force had held his father incommunicado for days and made certain (through threats and, it is suspected, a large bribe) that he never again talked about his discovery.

The material was secretly flown out of Eighth Army Headquarters in Fort Worth, Texas, to Wright Field (later Wright-Patterson AFB) in Dayton, Ohio. At Wright Field, according to an officer who was there, Lt. Col. Arthur Exon (who would become commander of the base in the mid-1960s), it underwent analysis in the Air Force's material evaluation laboratories. Some of it, he recalled, was "very thin but awfully strong and couldn't be dented with heavy hammers. . . . It had [the scientists] pretty puzzled. . . . [T]he overall consensus was that the pieces were from space."