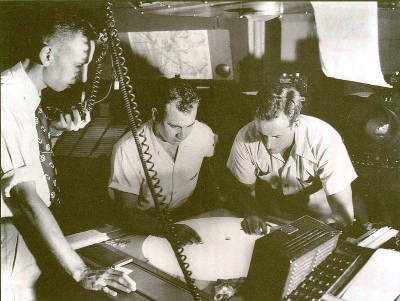 In short order Project Sign's advocates of extraterrestrial visitation were reassigned or encouraged to leave the service. The Air Force then embarked on a debunking campaign interrupted only for the brief period between 1951 and 1953 when Capt. Edward J. Ruppelt, who took an open-minded approach, headed the official UFO project. Project Sign was succeeded by Project Grudge (1949-1952); Project Blue Book, established in March 1952, succeeded Project Grudge. Practically until the day the Air Force closed down Project Blue Book in December 1969, it denied that such a document had ever existed, even when former UFO-project officers swore they had seen or heard of it. No one could produce a copy of the document, however, because the Air Force had all copies burned.

At least one source disputes this account, on the authority of Capt. Ruppelt, who tells it in his memoir of his Project Blue Book years, The Report on Unidentified Flying Objects (1956). Years after the original incidents, a retired AMC-assigned officer (now deceased) claimed that Project Sign prepared two drafts of the estimate. The first draft referred to what the officer remembered as a "physical evidence" case in New Mexico. When Vandenberg saw this reference, he demanded its removal. The second draft, with the offending paragraphs deleted, argued its case solely from eyewitness testimony -- of which the Chiles/Whitted encounter was an impressive example. Vandenberg could now claim that, in the absence of physical evidence, no proof existed.

A long time would pass before civilian investigators learned of this New Mexico physical-evidence case. It would turn out to be one of the most important incidents -- perhaps the most important incident -- in UFO history. With these revelations would come the belated realization that ufology has two histories: a public one and a hidden one. But we're getting ahead of ourselves. . . .

Don't Judge a Book by Its Cover

Judging from the Air Force's press notices, Project Blue Book had the UFO problem well in hand. But in reality, for almost all of its nearly 20-year existence, it was a low-priority operation headed by a lower-ranking officer. A well-funded but highly classified project (even now its name is not known) handled sensitive UFO cases. The staff for Project Blue Book was small and, according to astronomer J. Allen Hynek (Project Blue Book's scientific adviser), less than hardworking. Nonetheless, the Air Force regularly assured reporters, who then uncritically passed the line to newspaper readers, that thorough, scientific investigations had proved the nonexistence of UFOs. In a 1968 letter to the project, Hynek leveled several charges against Project Blue Book: It lacked the trained personnel necessary for the job, had conducted "virtually no dialogue" with the "outside scientific world," and employed statistical methods that were "nothing less than a travesty."