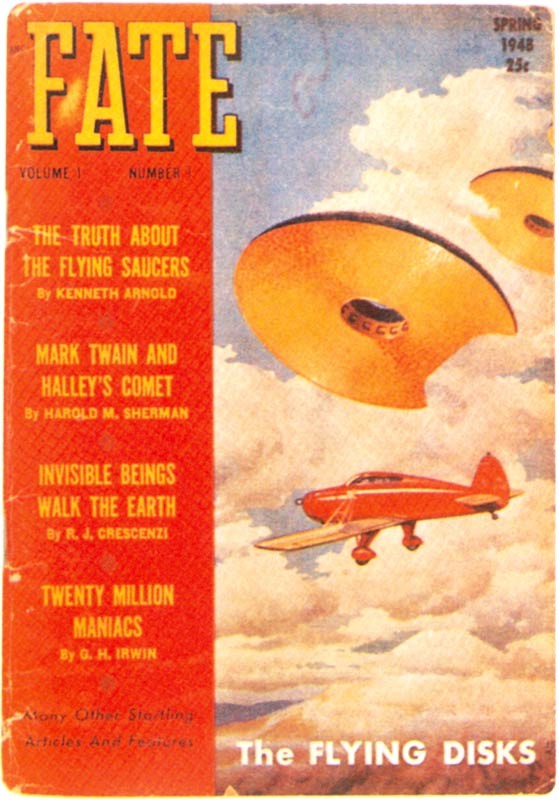 The date was June 24, 1947, a Tuesday; the time, just before three o'clock in the afternoon. Kenneth Arnold, a private pilot and fire-control-equipment salesman from Boise, Idaho, was flying over the Cascade Mountains searching for the remains of a lost C-46 for which a $5,000 reward had been offered.

Arnold never found the missing aircraft, but what he did see put his name in newspapers all over the world. He had just made a 180-degree turn over Mineral, Washington, when a bright flash of light startled him. During the next 30 seconds, Arnold frantically searched the sky for its source -- he was afraid he was about to collide with another airplane. Then he saw another flash to his left, toward the north. When he looked in that direction, Arnold spotted nine objects, the lead one at a higher elevation than the rest, streaking south over Mount Baker toward Mount Rainier. Watching their progress from one peak to the next, he calculated their speed at 1,700 miles per hour. Even when he arbitrarily knocked 500 miles off that estimate, Arnold was still dealing with an impossible speed figure.

The objects, darting in and out of the smaller peaks, periodically flipped on their sides in unison. As they did so, the sunlight reflected off their lateral surfaces -- thus explaining the flashes that had first caught his attention. Arnold wrote later, "They were flying diagonally in an echelon formation with a larger gap in their echelon between the first four and the last five." The lead object looked like a dark crescent; the other eight were flat and disc-shaped. Arnold estimated that the chain they comprised was five miles long. After two and a half minutes, they disappeared, heading south over Mount Adams. The age of unidentified flying objects (UFOs) had begun.