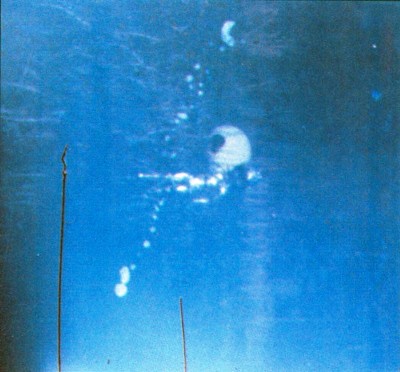 When studying the Roswell incident, a healthy dose of skepticism will help weed out phony information-such as this photograph of a "humanoid."
Intercontinental U.F.O. Galactic Spacecraft Research and Analytic Network Archives

Those who participated in recovering alien bodies at Roswell kept silent for years. Finally, as initial reports of the Roswell incident began to appear in the 1980s, they began to confide to close friends or family members what they had seen. Even then they were uneasy, still afraid of getting into trouble. One participant, Capt. Oliver ("Pappy") Henderson, flew the plane that first spotted the bodies. Apparently, judging from what he told his family, he also saw the bodies up close. Sgt. Melvin Brown rode in a truck with the bodies from the crash site to Roswell Field, then stood guard at the hangar where they were first stored.

Several persons who were at Wright Field or who knew individuals who were have testified to the arrival of wreckage and bodies at Wright in July 1947. One of these, retired Gen. Exon, says a top-secret committee was formed to oversee the investigation of this and other highly classified UFO incidents. Nearly 20 years later, when he took command of the base, the committee was still operating. It had nothing to do with Project Blue Book, the poorly funded, inadequate project that apparently served little more than a public relations function. As Brig. Gen. Bolender had indicated in an internal Air Force memorandum, UFO reports "which could affect national security . . . are not part of the Blue Book system."

Echoes of the Roswell incident have been heard for decades in popular folklore about secret rooms and buildings at Wright-Patterson AFB where government personnel study physical and biological proof of alien visitation. Most) -- but not all -- are "friend-of-a-friend" tales. Retired Wright-Patterson employee Norma Gardner claimed before her death ("Uncle Sam can't do anything to me once I'm in my grave.") to have catalogued UFO material, including parts from the interior of a machine that had been brought to the base some years earlier. She also said she had typed autopsy reports on the bodies of occupants; once, moreover, she saw two of the bodies as they were being moved from one location to another. From her description -- if she was telling the truth -- she saw the Roswell entities.

In the mid-1960s Sen. Barry Goldwater, a brigadier general in the Air Force reserve, asked his friend Gen. Curtis LeMay about the rumors. Goldwater told The New Yorker (April 25, 1988) that LeMay gave him "holy hell" and warned him never to bring up the subject again.