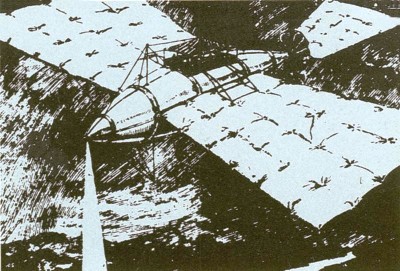 The UFO at Lake Elmo was just one of many "airships" seen between November 1896 and May 1897.
Intercontinental U.F.O. Galactic Spacecraft Research and Analytic Network Archives

Late on the evening of April 13, 1897, as they were passing through Lake Elmo, Minnesota, on their way to Hudson, Wisconsin, Frederick Chamberlain and O. L. Jones spotted a shadowy figure in a clearing two blocks away. The figure carried a lantern and seemed to be looking for something. Thinking there might be some emergency, Chamberlain and Jones turned toward the clearing, but the figure and lantern disappeared into the trees. Moments later they heard the crackling of twigs and branches, followed by a "rushing noise . . . like the wind blowing around the eaves of a house," Chamberlain told the St. Paul Pioneer Press (April 15). "A second later and we distinguished a long, high object of a gray white color."

Although the two men could not get a clear view of it in the darkness, the object, which had two rows of red, green, and white lights on each side, looked like "most of the top of a 'prairie schooner,'" Chamberlain said. It rose at a sharp angle, then headed south just above the treetops.

At the clearing, the two witnesses found, impressed in the wet ground, 14 two-foot-long prints, six inches wide, and arranged in an oblong pattern seven on a side. Apparently, these were traces left by the craft.

Around that same time Adam Thielen, a farmer in the Lake Elmo area, heard a buzzing sound above him. When he looked up, he saw a dark object with red and green lights sailing overhead.­

Could we stop an asteroid on a collision course toward Earth?
10 Reasons Why Space Exploration Matters to You
King Tut Found to Have a Meteoric Dagger