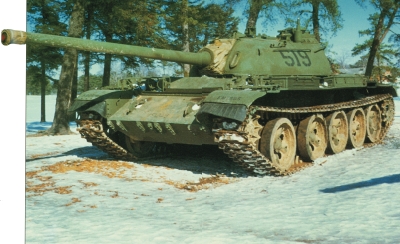 The T-44, an unsatisfactory model, became the T-54 Main Battle Tank when the T-44 chassis was equipped with a new turret and a heavier 100mm main gun.
©2007 Publications International, Ltd.

The T-54/T-55 series of Main Battle Tanks were descended directly from the famous Prinadlezhit-Chetverki, or T-34 Medium Tank, the Soviet Union's armored savior. The T-34 evolved into the T-44 medium tank, which had a different engine, a torsion bar suspension system, a larger chassis, and a dome-shaped turret lying close to the hull.

The T-44 had serious design problems and was not widely produced. Design work on a new, heavier medium tank was started. In 1946 the first prototype of the T-54 rolled onto the testing grounds.

The T-54 was built on the T-44 chassis and had a 100mm Model 1944 main gun. The turret was cast in one piece with the top welded on, a technique Soviet industry worked out for the T-34 turret. Early production models had manual gun-laying systems, but these were later upgraded to powered models.

The T-54 carried two 7.62mm machine guns, one in the hull and the other in the turret. A third machine gun was mounted on the turret at the loader's cupola.

The T-54 Main Battle Tank, more heavily gunned than the T-34, was supplied to a large number of military forces around the world.
©2007 Publications International, Ltd.

Like the T-44, the T-54 used a torsion bar suspension system. The AV-12 diesel engine was mounted transversely to drive the rear sprockets and produced 520 horsepower.

Five rubber-tire road wheels were mounted per side. There were no return wheels; the track ran across the top of the road wheels on its return.

The distinguishing identification feature of the T-54/T-55 series is the gap between the first and second road wheels. The T-54 was the first Soviet tank able to operate completely underwater. It could cross rivers at depths down to 18 feet by using a snorkel.

The T-55 Main Battle Tank was basically the T-54 with a new turret and more powerful engine.
©2007 Publications International, Ltd.

The T-55 model entered service in 1959 or 1960. It was essentially an improved T-54: a more powerful version of the same V-12 diesel engine (580 horsepower), a rotating turret floor, the elimination of the loader's cupola, and an improved transmission.

The antiaircraft 12.7mm turret machine gun and the 7.62mm machine gun mounted in the bow plate were removed in the T-55A version to allow more room for main-gun ammunition.

The T-55A was given an antiradiation lining, although no version of the T-54 or T-55 had true nuclear-biological-chemical warfare protection for its crew.

The T-54/T-55 series has proved so popular that an array of modernization packages are available around the world.

See the next page for specifications of the T-54/T-55 Main Battle Tank.