How can a telescope see through time? 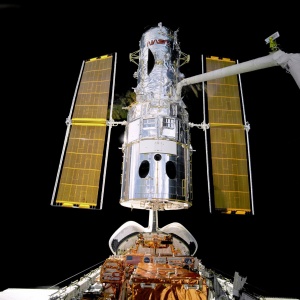 To puzzle out how a telescope can look through time into the past, let's start with an up-to-date example — what we see when we stare at our sun. OK, perhaps not "stare" — that's not a good idea. But if you were to go outside right this second to catch a glimpse of our favorite star, what you'd see is the sun's rays from the past. Eight minutes in the past, to be precise.

This is potentially quite exciting, isn't it? We're in the future! We could tell the sun who's going to win the World Series eight minutes before it finds out and make millions of dollars in solar gambling.

Unfortunately, we're not experiencing the thrills of the universe before anybody else. Rather than us getting a glimpse of the future, we're actually just too far away to see what's happening right this second to the sun. It all comes down to light and how quickly it gets to us. Light travels at 186,000 miles (300,000 kilometers) per second [source: Russell]. In technical science language, that is fast as all get-out.

It's so fast that when we switch on a lamp at home, we never have to "wait" for the light — or, more precisely, the light is so very close to us that the time it takes to reach us proves negligible. But the sun's rays — 92 million miles (150 million kilometers) away from us — still have to sprint quite a distance to us before they make it to Earth. So we're actually looking at the sun as it appeared eight minutes ago, always. If the sun was suddenly extinguished? We'd be blissfully unaware for eight minutes.

The sun is just a close example. Whenever we look out into the far reaches of space with a telescope, we're seeing the same thing. For instance, the closest star to us — Alpha Centauri — is so distant that we're observing it from 4.2 light years away [source: Russell]. Or how it looked 4.2 years ago.

Telescopes like the Hubble are looking at galaxies 100 million light years away; just as the sun is actually eight minutes older than what we see, we're looking at the galaxies as they looked 100 million years ago. That means that if we were on those far distant galaxies — right this second — looking at Earth with a powerful telescope, we'd be watching the dinosaurs trample around our planet.

In other words? Those distant galactic observers would also be seeing back through time as they watched us.

Where do they get the particles for accelerators?
New Eyewear Protects Your Identity from Facial Recognition Cameras
What do bugs have to do with forensic science?