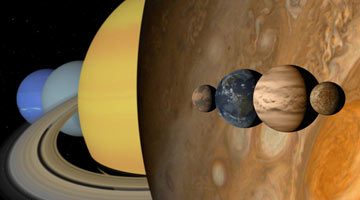 It's staggering to imagine a time when the Earth and its planetary siblings were nothing but cosmic dust. Yet astronomers agree that this was the state of things some 4.5 billion years ago. Our sun was but a fledgling protostar, continually amassing more matter via gravity and steadily cranking up its internal nuclear fusion. There was no solar system, only a giant, rotating cloud of particles called the solar nebula.

To figure out how all that leftover gas and dust led to planets, astronomers have largely studied the structure of our own solar system for clues. They've also looked to distant, younger solar systems still in varying stages of development.

With the formation of the sun, the remaining gas and dust flattened into a rotating protoplanetary disk. Within this swirling debris, rocky particles began to collide, forming larger masses that soon attracted even more particles via gravity. These particles contracted under gravity to create planetesimals, which collided with one another to become the solid inner planets. Meanwhile, gases froze into giant balls that would build the outer gas giants.

Why did rocky planets form closer to the sun and the gas giants farther away? One theory involves the solar wind, the steady flow of plasma that emanates from a star. When the sun first came into being, this wind was far stronger than it is today -- strong enough to blast lighter elements such as hydrogen and helium away from the inner orbits. When these expelled elements reached the outer orbits, the strength of the solar wind dropped off. The gravity of the outer gas giants quickly drew these elements in, bloating them into their current forms: solid cores of rock and ice covered with gas.

This planetary formation theory presumes that gas giants always occur in a solar system's outer orbits. Then, in 1995, astronomers discovered the distant planet 51 Pegasi b, a "hot Jupiter," or gas giant, that orbited very close to its sun. This discovery called for new theories, primarily that such planets must form far away from the central star and then move into a closer orbit.

Astronomers theorize that such an orbital migration, powered by a gravitational tug--of-war with other cosmic bodies, would take hundreds of millions of years. The journey would also destroy any smaller, inner planets in its path.

Explore the links on the next page to learn even more about our cosmic origins.

Why Do Stars Twinkle?
Jupiter: Yokozuna of Gas Giants, Banisher of Planets
Moon Base Builders Rejoice: More Water in the Moon Likely