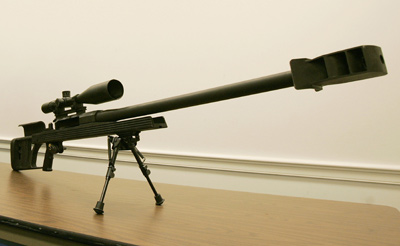 A Barrett .50-caliber rifle o­n display during a news conference at the Capitol in Washington, D.C. A bullet from one of these rifles can travel miles and penetrate armor.
­Getty Images

A palm-sized .50-caliber round fired from a Barrett M107 rifle travels through the air at 2,700 feet (823 meters) per second, and it can take out a lightly armored vehicle from more than a mile away [source: Discovery]. It will reach its destination faster than the sound of it being fired.

This is good news for modern soldiers; a weapon like this deals not only a mortal blow to opposing forces, but also a crippling psychological blow. Even the most dedicated opponent will consider taking up a new vocation after witnessing the human carnage caused by a direct hit from a .50-caliber round fired from about 17 football-field lengths away. In fact, the diameter, or caliber, of these bullets is so large that it's generally the biggest shell you'll see before you're dealing with an explosive projectile fired by a cannon.

More of these weapons are finding their way to a different battlefield: the U.S.-Mexico border, where drug cartels violently struggle for control of the drug trafficking business. When drug dealers shoot each other, they frequently miss. This conceivably means that you could be minding your own business a few miles inside the U.S. border and be fatally hit by a round fired in Mexico. Yes, it's a far-fetched scenario, but a large-caliber round can conceivably kill a person up to 5 miles (8 km) away [source: Barrett].

Theoretically, a centrally located sniper with a .50-caliber rifle would have the range to strike the White House, the Pentagon, Union Station, Reagan National Airport and American University, all of which fall within 4-mile (6.4-km) strike zone of the hypothetical .50-caliber weapon [source: Brady].

These weapons can destroy parked aircraft, penetrate an inch of armor from almost 40 yards (37 meters) away and be purchased legally online or at gun stores throughout most of the United States [source: Brady].

What they can't do is penetrate transparent aluminum armor. This clear ceramic material can stop a round from an anti-aircraft gun, and it's half as heavy and thick as bullet-resistant glass.

In this article, we'll learn what transparent aluminum armor is, how it's made and whether we can expect to see it on the battlefield or on your local law enforcement vehicle any time soon. First though, we'll take a look at how regular glass is made, and how you can beef it up to stop bullets.