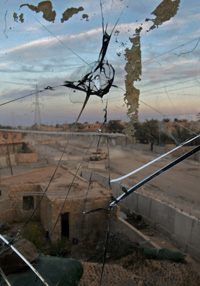 Since its arrival thousands of years ago, glass has been used to make windows, mirrors, telescopes, food-storage containers -- all sorts of handy things. What glass doesn't do, though, is stop bullets from passing through it. Not on its own, at least.

As there's a basic formula for making glass, there's also a recipe for making bullet-resistant glass: press together two thick layers of glass and sandwich between them a layer of a clear plastic called polycarbonate. (For a more in-depth discussion, read How does "bulletproof'" glass work?) This process is called lamination, just like when a piece of paper is sealed between two heated pieces of plastic to make a durable driver's license.

When struck by a bullet, the layers of glass and polycarbonate absorb the energy of the bullet. The outer layer (the layer exposed to gunfire) will shatter and create a cracked spider's web illustrating the outwardly expanding energy as it is absorbed through the pane. The middle layer of polycarbonate, however, typically stands up to the assault and stops the bullet from penetrating the inner glass. The thickness of bullet-resistant glass varies, but generally ranges from less than an inch (2.5 cm) to several inches thick.

This bullet-resistant glass often serves as a transparent armor on embassy buildings, privately owned homes and limousines, Humvees and any other structure (such as a bank or a gas station) in which the occupant is at risk of taking gunfire.

Bullet-resistant glass is commonly -- and mistakenly -- called "bulletproof glass," which doesn't exist, as testified to by its near-helplessness to a .50-caliber round. Don't think that bullet-resistant glass cracks so easily though. It can fend off a round from an AK-47. Essentially, it's hard to say what thickness of bullet-resistant glass will stop what kind of projectile, because so many factors like distance, velocity, type of weapon, type of ammunition and even wind conditions play a part in what will happen when an object strikes an enforced surface.

With that kind of uncertainty, you could see why people reinforce bullet-resistant glass with another pane of the stuff, effectively making a 2-inch (5-cm) window now 4 inches (10 cm) thick. While this adds protection to an armored vehicle, it also leaves it more vulnerable to attack. For one thing, the vehicle will weigh more, thereby slowing it down and making it an easier target. The extra weight will also result in higher fuel use, which reduces the vehicle's range before it needs refueling.

Armor-piercing .50-caliber bullets are designed to pass through bullet-resistant glass. These bullets often have a copper shell casing, which encloses a penetrating shell made of a harder substance, such as depleted uranium or tungsten carbide (which is about as hard as diamond). The outer shell disintegrates on contact with armor, but the penetrating shell inside the copper bracket does just as its name implies -- it continues traveling through the armor and wreaking havoc on the once-protected space behind the armor.­

­­Now we know how bullet-resistant glass works and how an armor-piercing .50-caliber bullet can pass through it. In the next section, we'll look at a much newer, lighter and stronger transparent armor that may one day find its way onto the battlefield: transparent aluminum armor.

Why is that t­ree on fire?

Think armor-piercing bullets sound destructive? A phosphorous-tipped armor-piercing incendiary round will burn at 3,000 degrees Fahrenheit (1,649 degrees Celsius) upon impact and, if shot at a tree, will set it on fire [source: Brady].