The Future of Transparent Aluminum Armor 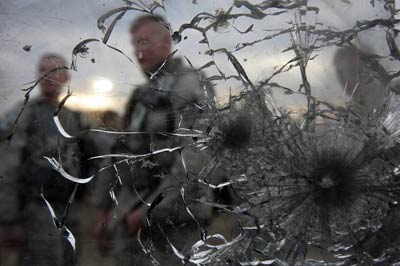 Bullet-resistant glass may linger on battlefields unless the price of transparent aluminum armor comes down.
David Furst/AFP/Getty Images

Over time, a regular pane of bullet-resistant glass will be worn away by windblown desert sand, not to mention incoming rounds from an assault rifle or shrapnel from roadside bombs. Transparent aluminum armor, on the other hand, is hardier. It stands up to .50-caliber rounds, is less affected by sand and fends off scratches more easily than traditional transparent armor.

If that's the case, why don't we replace the bulkier, less protective glass in use? Cost, for one thing.

­With a sense of optimism restrained by economic reality, the U.S. Air Force announced in 2005 the results of a series of tests conducted on the materia­l the previous year. While one affiliated researcher described transparent aluminum armor as being "light-years ahead of glass," he acknowledged that it was expensive and difficult to make in large sizes.

Heating and handling larger sheets of transparent aluminum require a sizable investment in infrastructure. For now, there's enough capacity to create 20-by-30-inch (51-by-76-cm) panes [source: CNRS]. That's large enough for most vehicular door windows but too small for front windshields. However, the cost of using these panes to replace existing glass is prohibitive. The bullet-resistant glass currently in use costs around $3 per square inch to produce, a steal compared to the $10 to $15 price tag for the same size piece of transparent aluminum [source: Air Force]. The additional costs of outfitting a vehicle with transparent aluminum armor would, in theory at least, pay for itself over time. Bullet-resistant glass would have to be replaced several times over, while the more expensive material has a much longer life span.

Developed by Raytheon and now commercially marketed by Surmet, transparent aluminum armor, though more expensive than bullet-resistant glass, is cheaper than sapphire, with which it shares common qualities, such as similar degrees of hardness and clarity. Sapphire is used in many different applications, such as semiconductors and bar code sensors, due to its ruggedness. As more industries switch to transparent aluminum for these needs, the price of production could drop to a point that makes it more feasible to build facilities capable of creating larger pieces.

While research continues on the development of this potentially life-saving material, armor-piercing .50-caliber rounds will continue making a mockery of standard bullet-resistant glass both on and off the battlefield.

Shoot on over to the next page for lots more information on bullets, bombs and bad guys.

Ever wonder how to make the stunt glass that you see getting broken over bad guys' heads in the movies? Well, you can do it at home, using a simplified recipe that's similar to one for real glass. Instead of using sand, soda and lime, however, you use water, liquid glucose and sugar. Simply mix the ingredients, bring them to a boil, form the mass into the shape you desire and let cool. In no time, you can fly headfirst through a ridiculously sweet but realistic looking piece of "glass." For the specifics, read this recipe at Stormforce Pictures.