Browse the article How Bearings Work

Have­ you ever wondered how things like inline skate wheels and electric motors spin so smoothly and quietly? The answer can be found in a neat little machine called a bearing.

The bearing makes many of the machines we use every day possible. Without bearings, we would be constantly replacing parts that wore out from friction. In this article, we'll learn how bearings work, look at some different kinds of bearings and explain their common uses, and explore some other interesting uses of bearings.

The concept behind a bearing is very simple: Things roll better than they slide. The wheels on your car are like big bearings. If you had something like skis instead of wheels, your car would be a lot more difficult to push down the road.

That is because when things slide, the friction between them causes a force that tends to slow them down. But if the two surfaces can roll over each other, the friction is greatly reduced.

A simple bearing, like the kind found in a skate wheel

Bearings reduce friction by providing smooth metal balls or rollers, and a smooth inner and outer metal surface for the balls to roll against. These balls or rollers "bear" the load, allowing the device to spin smoothly. 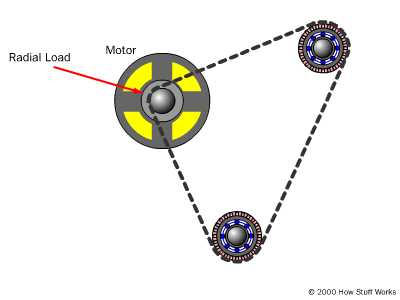 The bearings that support the shafts of motors and pulleys are subject to a radial load.

Bearings typically have to deal with two kinds of loading, radial and thrust. Depending on where the bearing is being used, it may see all radial loading, all thrust loading or a combination of both.

The bearings in the electric motor and the pulley pictured above face only a radial load. In this case, most of the load comes from the tension in the belt connecting the two pulleys.

The bearings in this stool are subject to a thrust load.

The bearing above is like the one in a barstool. It is loaded purely in thrust, and the entire load comes from the weight of the person sitting on the stool.

The bearings in a car wheel are subject to both thrust and radial loads.

Ball bearings, as shown below, are probably the most common type of bearing. They are found in everything from inline skates to hard drives. These bearings can handle both radial and thrust loads, and are usually found in applications where the load is relatively small.

In a ball bearing, the load is transmitted from the outer race to the ball, and from the ball to the inner race. Since the ball is a sphere, it only contacts the inner and outer race at a very small point, which helps it spin very smoothly. But it also means that there is not very much contact area holding that load, so if the bearing is overloaded, the balls can deform or squish, ruining the bearing.

Roller bearings like the one illustrated below are used in applications like conveyer belt rollers, where they must hold heavy radial loads. In these bearings, the roller is a cylinder, so the contact between the inner and outer race is not a point but a line. This spreads the load out over a larger area, allowing the bearing to handle much greater loads than a ball bearing. However, this type of bearing is not designed to handle much thrust loading.

A variation of this type of bearing, called a needle bearing, uses cylinders with a very small diameter. This allows the bearing to fit into tight places.

Ball thrust bearings like the one shown below are mostly used for low-speed applications and cannot handle much radial load. Barstools and Lazy Susan turntables use this type of bearing.

Roller thrust bearings like the one illustrated below can support large thrust loads. They are often found in gearsets like car transmissions between gears, and between the housing and the rotating shafts. The helical gears used in most transmissions have angled teeth -- this causes a thrust load that must be supported by a bearing.

Tapered roller bearings are used in car hubs, where they are usually mounted in pairs facing opposite directions so that they can handle thrust in both directions.

There are several types of bearings, and each has its own interesting uses, including magnetic bearings and giant roller bearings.

Some very high-speed devices, like advanced flywheel energy storage systems, use magnet bearings. These bearings allow the flywheel to float on a magnetic field created by the bearing.

Some of the flywheels run at speeds in excess of 50,000 revolutions per minute (rpm). Normal bearings with rollers or balls would melt down or explode at these speeds. The magnetic bearing has no moving parts, so it can handle these incredible speeds.

Probably the first use of a bearing was back when the Egyptians were building the pyramids. They put round logs under the heavy stones so that they could roll them to the building site.

This method is still used today when large, very heavy objects like the Cape Hatteras lighthouse need to be moved.

to see the earthquake bearing support system at work.

The 267 columns that support the weight of the airport each ride on a 5-foot-diameter (1.5-meter) steel ball bearing. The ball rests in a concave base that is connected to the ground. In the event of an earthquake, the ground can move 20 inches (51 cm) in any direction. The columns that rest on the balls move somewhat less than this as they roll around in their bases, which helps isolate the building from the motion of the ground. When the earthquake is over, gravity pulls the columns back to the center of their bases.

For more information on bearings and related topics, check out the links on the next page.